Lula’s Victory in Brazil- Hope for the Developing South

Lula’s Victory in Brazil- Hope for the Developing South

Lula is back. It was twenty years ago in October 2002 to the month, that one Lula Ignacio de Silva, a metalworker and union leader became President of Brazil. After two attempts in the 1990s at the Presidency Lula finally ascended on a broad-based working-class ticket.  A decade plus of the ‘Lula moment’ saw mass […]

Home|[in] focus|Lula’s Victory in Brazil- Hope for the Developing South
Categories: [in] focus 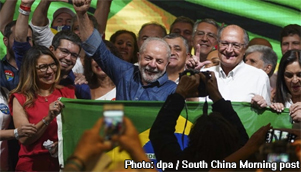 Lula is back. It was twenty years ago in October 2002 to the month, that one Lula Ignacio de Silva, a metalworker and union leader became President of Brazil. After two attempts in the 1990s at the Presidency Lula finally ascended on a broad-based working-class ticket.  A decade plus of the ‘Lula moment’ saw mass expansion of social development, social cohesion, with huge poverty programs that saw Brazil taking its place in Latin America and the community of nations.

However, this 2022 election was the closest in Brazil’s history. The vote also marked the first time that the sitting president failed to win re-election. Just over two million votes separated the two candidates. Lula presides over a divided nation and has his work cut out.

Bolsonaro in his brash right-wing mode, launched multiple attacks on institutions and the wide scale abuse of social media that polarised the nation leading to public violence.  Many organisations were subjected to a wave of state-sanctioned oppression from supporters of the new government. The disastrous mismanagement of the Covid crisis saw almost a million Brazilians dying.

Yet Bolsonaro managed to garner 49% of the vote. This signifies that nationalist populism is still a potent force. A Lula administration needs to address boosting economic growth and re-building institutions – and being an inclusive president. Lula would be cognisant that any economic downturn – such as the 2012 one – would once again open the door for the privileged classes to shore up support across the social and economic spectrum, opening the doors to populism, lawfare and social media storms and disinformation that can reverse these democratic gains.

The close election result shows deep divisions in Brazilian society, riven along class, race and regional and religious evangelical lines. The election victory may also mean that Lula will of necessity be prudent and tread carefully with his reform agenda. Some have criticised Lula for ‘mainstreaming his policies ’to appease the power structure

Significantly, Lula’s victory also comes atop a new ‘left red tide’ sweeping Latin America. This has seen the victory of left parties in Chile under young Gidon Boric as well as Colombia’s Gustvo Petric and Francia Marquez, Colombia’s first black vice President.  Together with Ámlo Obrador’s Mexico, a solid and strong left social democratic momentum is taking root in Latin America. This model is most appealing and relevant in a post Covid world where strong developmental states are required to meet a myriad of social development goals and ensure inclusive and redistributive policies, while addressing the multiple climate change crises and migration flows within a human rights centred framework. This Latin American model could turn out to be the one a post pandemic world so desperately needs

At a geopolitical level, Lula’s victory is also a boost for BRICS, and broadly the developing South, as well as Africa. A post-Covid global economy in the doldrums requires much needed multilateral reforms at the UN and G20, especially regarding developing finance, infrastructure, access to IP and technology transfer especially regarding pandemics and climate technologies. Also significant is that most global leaders have warmly congratulated Lula, from all the BRICS nations as well as US President Biden. In this milieu Lula, an advocate for multilateralism is a welcome boost, and can even be a mediating force and voice in a world raptured by complex geopolitical schisms.

A Lula administration is also bound to revive the historical solidarity with many nations in the Global South – Cuba, Palestine, South Africa. Lula is likely to revive the Afro-Brazil relations that characterised his term of office seeing better solidarity partnerships rooted in social justice. Revived discussions on slavery and the need for reparations at the UN level could again be on the agenda.

Another ray of light and hope in Lula’s presence is his position in global fora such as the UN COP 27, where a fair deal for a Just transition is required, one that recognises the rights and level of development of ‘differing responsibilities’ for developing nations. By committing to protect the Amazon- the lung of the world- and halt the rampant deforestation and mining that were so rife under the Bolsonaro administration, Lula and the PT Workers Party have won significant global admiration.

Finally, Lula is a born fighter- for the working class, the poor and a visionary for a socially just society and world order.  His complex journey- from worker to union leader- to president, to prisoner- and again president is one of heroic proportions.   In a world fractured by race, class, cultural-religious divisions, and the post pandemic climate crises, Lula da Silva’s victory is refreshing for Brazilians, for Latin Americans and the World.

Mr. Ashraf Patel is the digital data and economy associate at the IGD. His research is also supported by the National Institute for Humanities and Social Sciences (NIHSS) and the South African BRICS Think Tank (SABTT). Mr. Patel’s views do not necessarily reflect those of the IGD