Book Review | from Afro-euphoria to Afro-realism: a Reality Check on India-africa Relations over the Past Decades

Book Review | from Afro-euphoria to Afro-realism: a Reality Check on India-africa Relations over the Past Decades

Home|[in] focus|Book Review | from Afro-euphoria to Afro-realism: a Reality Check on India-africa Relations over the Past Decades
Categories: [in] focus 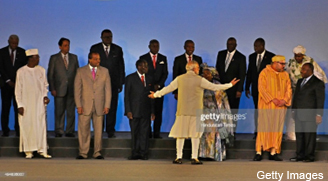 The ‘Harambee Factor’ is a meticulously researched book with a broad remit and shares African’s perceptions on how the local stakeholders perceive India’s development cooperation on the continent. The author has served in crucial postings in Africa and at the Africa desk at the VideshMantralaya and shares policy perspectives and evidence-based studies on contemporary India-Africa economic and development partnerships with the reader. The narrative affirms that the continent is at the top of India’s foreign policy priority.

Africa is a powerhouse with 54 diverse countries, each with voting power at the UN. Many countries have natural resources- varied agro-climatic zones, cultivable farmland and water resources. The continent has seen fewer conflicts, greater macro-economic stability and a rising middle class with spending capacity. The Indian private and public sectors have expanded their economic footprints in African markets in multiple sectors.

India’s development compact in Africa includes aid, trade, grants and FDI. In addition to intra-South commerce and investments, capacity building has been the bedrock of India- Africa relations. India established the Harar Military Academy in Ethiopia in 1958 to train military personnel. A few years later, the Indian Technical and Economic Cooperation (ITEC), a bilateral assistance programme, was launched in 1964, through which India transferred technology and scholarships were awarded to students in Africa and other countries of the global South for higher studies in educational institutions in India. India’s African engagement has grown incrementally. The Focus Africa Program (2002), designed in response to increasing trade with Africa, the India Development and Economic Assistance Scheme (IDEAS) set up in 2004, enabled India to share her development experiences through lines of credit (LoCs)- soft loans on easy repayment schedules, while the Techno-Economic Approach for Africa-India Movement (TEAM-9) initiative launched in the same year added to India’s geographical presence, an additional eight countries in West Africa. The novel Pan Africa- e network Project ( PAeN) (2005), at the intersection of the digital and the health segment, offered telemedicine and tele-education to several countries across Africa via satellite connectivity. The three India- Africa Form Summits (IAFS of 2008, 2011 and 2015) further intensified the ongoing economic and development cooperation with the continent. IAFS III (2015) set the benchmarks high and announced LoCs worth USD 10 billion, USD 600 million in grants, USD 100 million and USD 10 million were allocated for the India Development Fund and Health Fund, respectively. The past two decades have seen exponential growth in trade from a mere 3.3 billion USD in 2000-2001 to about 68 billion USD in 2019-2020. The book reviews aspects of India’s Africa policy and what worked and did not, providing valuable inputs for African watchers and policymakers.

The book assesses development projects funded by concessional LoCs, bilateral trade, people- to people initiatives, and grant projects between India and Africa. For example, the author dwells on a notable grant project, the PAeN project (launched in 2009) at Rs 595 crores, and the concessional LoCs extended to African countries. The author benchmarks the success of these initiatives based on; their afterlives or sustainability- once the project period and funding had come to a close; the spin-offs generated for the local peoples- employment and capacity building; the commercial outcomes for Indian stakeholders- greater market access and finally, the goodwill garnered for India.

The PAeN is being revived in phase II ( 2019), though on a much smaller scale, with a greater emphasis on online education. The telemedicine component was not as successful as envisioned. Telemedicine has been a lifesaver during the Covid -19 pandemic, and the time is opportune to rebrand and re-launch the project. Insights on hurdles faced by the PAeN, for instance, offer valuable inputs for policymakers on how to factor in sustainability in these projects. The author queries, would it have been more viable to implement PAeN bilaterally rather than through the AU representing 54 diverse countries?

The author gauges the success stories and challenges that plagued some of the LoCs. Eighty per cent of India’s LoCs go to Africa. The book cites bureaucratic delays in project approvals, poor quality and delays in project completion, lack of transparency in project award and the role of the revised guidelines of 2015 in streamlining the process and overcoming the above-stated hurdles. Based on data from the ground, the author suggests alternative funding mechanisms for development cooperation- Buyers Credit (Exim Bank of India), increased role of other Indian banks, social impact investment funds, and Trilateral Cooperation- such as the Supporting Indian Trade for Aid (SITA), a successful aid for trade program that generated livelihoods.

People-to-people connections: Cognizant of the significance of people-to-people ties, the author cites collaborative initiatives between two civil society organisations; the Barefoot College (Tilona) and the Self Employed Women’s Association (SEWA), Ahmedabad, and their African counterparts. The solar mammas trained in Tilonia went back home to light up their villages. SEWA shared sister-to-sister learnings in micro-finance, cooperatives, and food processing and built capacities for women across African geographies. The author also refers to the yeoman service rendered by diasporic charitable organisations- the Hindu councils, Gurudwaras, Shia and Bohra communities. Such people-to-people initiatives, he writes, ‘go beyond economic or strategic objectives.

The key takeaways of the book are; development initiatives in Africa need to draw up innovative funding and trade mechanisms that avoid pitfalls from the past; an increased role of the private sector and private-public partnerships to bridge the funding gap for infrastructure development, the imperative of designing sustainable projects that ensure their afterlives once the external funding ceases and urges greater ownership of these initiatives by the African partners.

The book is of immense relevance as it does a reality check on India- Africa relations over the past decades. It surmises that the ongoing political, economic and diplomatic partnerships can no longer be founded only on nostalgia, historical antecedents and overstated narratives of South-South solidarities. That future engagement necessitates realignment with ground realities- of a continent with an increased agency and choice of multiple development partners.

The book review was first published by the outlookindia.com