Developed countries have been pushing hard for a new deal at the United Nations (UN) COP26 climate conference in Glasgow, UK. In preparation for that South Africa decided to decrease its emission level targets and hosted climate envoys from the UK, US, France, Germany and the EU to discuss a possible coal retirement plan. Renewable energy […] 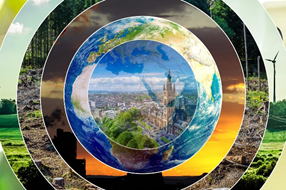 Developed countries have been pushing hard for a new deal at the United Nations (UN) COP26 climate conference in Glasgow, UK. In preparation for that South Africa decided to decrease its emission level targets and hosted climate envoys from the UK, US, France, Germany and the EU to discuss a possible coal retirement plan. Renewable energy is the future, no doubt about that, but how just is the proposed transition for South Africa and its citizens who would have to lose jobs? A new spectre faces developing nations with rich G7 nations incorporating climate change into their new Green capitalism models –  that if not checked will erode the prospects for industrialization in the developing world. South Africa’s manufacturing base is already at its lowest point and jobs shedding continues unabated with major bouts of power cuts the ‘new norm’.

Eskom is scrambling to find finance to operate and keep the lights on, let alone transition away from coal to solar and wind.  Mineral Resources and Energy Minister Gwede Mantashe, a proponent for an energy mix that continues to use sources such as coal and nuclear for development and industrialisation, has rightly described giving up coal too rapidly and unsystematically as “economic suicide” as mining is the bedrock of manufacturing and therefore industrialization and structural transformation. No successful nation has skipped this economic phase. Nevertheless, Western corporations are eager to enter South Africa’s energy market with new renewable technologies, including green hydrogen production in South Africa for future use in Europe.

Electricity prices have soared to record highs in Britain as a period of still weather is curbing wind power, exposing the UK’s reliance on intermittent renewables. Ironically their ability to meet peak demand shrinks as coal and nuclear power stations close early. Two coal units at West Burton had to be turned on as the weather system bringing warm temperatures suppressed wind around the UK’s turbines. While the UK has been moving away from coal power, it is still used in reserve to provide stability to the national grid. Among EU nations, Germany has been the most aggressive in pursuing a renewable energy future. But last month, faced with a coal and natural gas crunch, it woke up to the reality that after investing half a trillion dollars on the plan, it does not have the capacity to bottle up enough weather-dependent power to hold out even for a few fossil-fuel-free hours. In France nuclear power makes up 78% of the energy generated, and renewables 19%. France and other countries like Sweden and Bulgaria, have a high nuclear component in their power grid. Nuclear power is zero-emission. It has no greenhouse gases or air pollutants; it is green indeed. But by 5 November 2021 at COP 26, the U.K. announced that 46 countries have signed on to an agreement to phase out coal power in advanced economies by the 2030s and worldwide by the 2040s. This includes a promise not to invest in new coal power at home or abroad. Although a global effort to phase out coal power generation is picking up steam, the U.S. and Asian powers Japan, China and India are notably absent from the list of countries to join the major pledge at COP26.

One such proposal is simply to liberalise ‘environmental goods and services’, including public utilities like water and sanitation. Another such proposal is the EU’s Carbon Border Adjustment Mechanism, which is projected to have little impact on emissions but will cause disproportionate export declines for developing economies. Biden’s’ ‘New Green Deal’ at the moment remains mere lip service as US coal exports to China are at an all-time high in this super commodity cycle.

Real life cases from the developing world clearly show that there should be an energy mix linked to industrialization.  Coal is still an important part thereof for SA and clean coal technologies are innovative solutions to meet mitigation targets. At the same time nuclear energy is integral to South African energy generation. Just transition should be managed step by step without excessive emotions and unrealistic environmental pledges. What should also be considered is deepening energy cooperation within BRICS fellow countries. China could add eight large-scale carbon capture, utilisation and storage projects by 2025. Implementation of Carbon Capture, Usage and Storage (CCUS) technology could spare China’s carbon emissions by 60 per cent by 2050. China National Petroleum Corp, the country’s largest oil and gas producer, also said earlier it will continuously push forward CCUS projects as an important option for reducing CO2 emissions in the energy sector. Russia is one of the world’s largest producers of nuclear energy. In 2020 total electricity generated in nuclear power plants in Russia was 20.28%. Rosatom company, along with Gazprom Neft have embarked on cooperation in the field of hydrogen energy and the reduction of carbon dioxide emissions. Turkey, a member of the BRICS outreach dialogue, is also well-versed in the construction of floating power stations utilizing natural gas and diesel fuels.

Even in the very best conditions, solar and wind farms do not generate power round the clock, and they require fossil-fuel back-up. This will not change until we develop very-large-scale cost-effective technology to store the power they produce. Thus, a balanced energy mix is the desired option with close BRICS cooperation and cooperation in Africa and the global South, where South-South co-operation is possible amongst equals in a manner that respects policy space for national and regional development, including through research and development. Developed countries have taken their time to advance their economies using fossil fuels and the principle of common but differentiated responsibilities will remain important for developing countries to chart a balanced way forward in their just transitions, guided by the policy space provided by the UN IPCC.

The unprecedented diplomatic offensive of the European and US envoys to South Africa in October, coupled with their own contradictory and hypocritical stance on calling for ending coal while US coal exports are at an all-time high suggests the intensification of economic nationalism at home – similar to vaccine nationalism – while pushing for neoliberalism and market access abroad. By staying away from COP26, China and Russia have been honest and diplomatically transparent to the world. As signatories to the UN IPCC framework, they are realists with regards to their energy needs and industries, while investing in new green technologies such as clean coal and new generation nuclear power in moving towards a low carbon economy, and in line with the development policy space that the UN IPCC provides. Africa and the developing world must thus use their relations with the global South and global North to carve out their own pathways towards a just transition, one in line with their levels of development, capabilities, and development plans for the future.

Ashraf Patel is the digital data and economy associate at the IGD and is a graduate on the Masters in Management (MM)   Public Policy and Regulation Management (ICT) from the Graduate School of Public and Development Management (P&DM), University of Witwatersrand, South Africa. His views do not necessarily reflect those of the IGD