On 6 January, outgoing President Donald J Trump instigated a mob insurrection against the US Congress, capping off what former European and Russian National Security Council official Fiona Hill termed a “self-coup” attempt, which he had been building up to virtually from the outset of his presidency in January 2017. On Monday, the US House […] 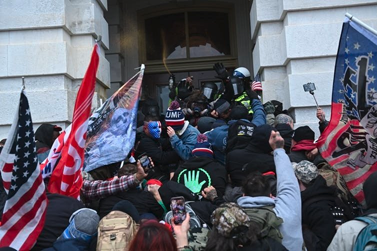 On 6 January, outgoing President Donald J Trump instigated a mob insurrection against the US Congress, capping off what former European and Russian National Security Council official Fiona Hill termed a “self-coup” attempt, which he had been building up to virtually from the outset of his presidency in January 2017.

Although this unprecedented second impeachment of Trump by Democrats could complicate the momentum of incoming president, Joe Biden, to achieve his coronavirus recovery and economic stimulus agenda in his first 100 days, there is another possibility: In the process of holding Trump accountable for inciting domestic terror against the US Capitol, Republicans are now in a defensive predicament as they will be hard pressed against blocking Biden’s agenda.

Senate majority leader Mitch McConnell indicated his support for impeachment while GOP deputy leader in the House, Liz Cheney, was among those who voted in support of Trump’s impeachment.

Republicans are bitterly divided: not only about how to respond to Trump’s treason and that of his followers, including House and Senate Republicans who resisted certifying Biden’s victory. There is also the double loss of Senate runoff elections in Georgia, flipping Senate control to the Democrats. Losing Georgia is also attributed to Trump’s delusional behaviour and likely illegal intervention in that state to overturn its results.

But Trump’s failed coup attempt ranks as a national trauma along with the November 1963 assassination of President John F Kennedy. This propelled Kennedy’s successor, Lyndon Baines Johnson, to pass the Civil and Voting Rights Acts and launch his War on Poverty. 9/11 similarly propelled President George W Bush into his war of choice in Iraq and his global war on terror.

The events of 6 January constitute an American national trauma of similar magnitude, combined with a pandemic of unprecedented proportions, compelling a presidency of emergency mobilisation. Biden can be expected to begin his first 100 days accordingly in the spirit of Franklin D Roosevelt and Johnson.

Under these crisis emergency circumstances involving GOP culpability in Trump’s four years of unhinged impunity, Senate Republicans are not in as strategic a position, under soon-to-be minority leader Mitch McConnell, to mobilise against Biden and Harris as they were in 2009 when McConnell promised to make Barack Obama a one-term president.

This does not, however, guarantee smooth sailing for Biden and Harris, given their lack of a commanding Senate majority amid only a slim majority in the House of Representatives, coming off very disappointing down-ballot losses in November. But unlike the inexperienced Obama, who depended heavily on Biden as vice-president, in navigating Congress, Biden’s veteran decades of Senate leadership in a variety of roles should bode well for the complicated road ahead that he and Harris will face in overcoming the pandemic and generating economic recovery momentum while getting Cabinet nominees confirmed.

Otherwise, overcoming the incendiary legacy of Trump in the wake of the unprecedented brutal and deadly 6 January domestic terror attack, instigated by Trump and allies on the US Capitol, opens up another chapter in the American experience.

Trump’s presidency ushered the US into a renewed Civil War trajectory of insurrectionary white backlash reaction to the accelerating multiracial, multicultural democratisation of the United States which, unlike in the case of post-Civil War reconstruction, will not be reversed as happened in the 1870s.

For African-Americans, the end of the reconstruction was a virtual return to slavery; that is until the Civil Rights-Black Power of the 1960s which ushered in the multiracial democratisation-white backlash authoritarian dialectic that brought us the Obama-Trump dynamic of a crossroads moment confronting America and its future. That said, it is important to begin unpacking the implications of the failed Trump-inspired insurrectionary coup attempt. There are many more questions than answers in investigating the putsch and in discerning outcomes.

For starters, from an African-American perspective, statehood for the District of Columbia becomes considerably more compelling from the standpoint of the district having greater command and control over security and the capacity of law enforcement to pre-emptively respond to insurgent threats which are not likely to diminish.

Apart from the racial and partisan political calculus of how DC statehood would help level the playing field between Senate Democrats and Republicans – which is why statehood for Washington DC is such an uphill struggle. The fact that Mayor Muriel E Bowser did not have the authority to call out the National Guard contributed to the catastrophic failed federal security response to the mob insurrection as it unfolded. The D.C. National Guard can only be deployed after Pentagon approval and, by extension, the president. We know that at the time Trump was busy revelling in excitement, as he watched on TV, the mob attack against the legislative branch which he had encouraged: his ‘special’ people whom he ‘loves’!

Whether or not Democrats controlling both houses of Congress during the Biden’s first two years results in statehood being achieved, there is a proposal advanced by DC Delegate Eleanor Holmes Norton that might answer the security-law enforcement question: approval of legislation transferring authority over the DC National Guard from the federal government to the mayor. But this does not fulfil the self-determination issue that would effectively give African-Americans governance control over a state within the American republic.

In any case, there are much broader national security issues at stake raised by the domestic terror attack on the US Capitol and the fact that this attack is not an isolated event but falls within the Trump-led national far-right insurrectionary movement against state and local governments by racist far-right militias, mobilised as anti-coronavirus lockdown resistance.

The militia demonstrations in Michigan against Governor Gretchen Whitman’s s coronavirus policies and the threat of kidnapping and possible execution she faced prior to the November election is emblematic of this wider threat assessment the FBI has issued in advance of the Biden-Harris inauguration on 20 January. Michigan was Trump’s dress rehearsal for the 6 January attack on Capitol Hill.

Similar incidents have been occurring (and will occur) elsewhere throughout the US, raising the question of elevating far-right domestic terror and white supremacy on the country’s national security agenda.

The far-right has recruited military veterans and infiltrated law enforcement. Will Biden’s Justice Department deploy the FBI’s notorious COINTELPRO (Counter-Intelligence Programme) which dismantled militant black activism in the late 1960s and 70s against the more potent threat of racial fascism? Or will double standards endure? Will the US Federal Communications Commission be empowered to take on the far-right propaganda ecosystem of hate among cable TV and talk radio outlets that have effectively hijacked the Republican party into becoming a purveyor of know-nothing extremism under Trump.

These are issues that hardly begin chipping away at the iceberg of threat perceptions awaiting Biden and Harris as they confront the toxic legacy of the Trump presidency; Trump and his minions having done all in their power to hand over a poisoned chalice in foreign and domestic policy alike.

Meanwhile, however, there are appointments awaiting Trump with New York prosecutors Letitia James and Cy Vance, Jr, who are investigating civil and criminal tax cases against him in his old home sweet home.

Mr. Francis Kornegay is a Senior Research Fellow at the Institute for Global Dialogue. He is also a member of the JIOR international editorial board and a past fellow of the Woodrow Wilson International Center of Scholars where he worked on his edited work, Laying The BRICS of a New Global Order (2013). Kornegay holds Masters Degrees in African Studies from Howard University and in International Public Policy from the School of Advanced International Studies at Johns Hopkins. Kornegay served two stints in the US Congress as a professional staffer, among other things, developing financial sanctions legislation on South Africa. His latest co-edited publication is Africa and the World: Navigating Shifting Geopolitics (Mapungubwe Institute for Strategic Reflection, 2020). His views do not necessarily reflect those of the IGD.

This article was first published in News24: