We have asked some of Africa’s leading academics and thinkers to reflect on what the inauguration of a new US president means for Africa. This series is produced In collaboration with the University of the Witwatersrand’s African Center for the Study of the United States. The storming of the United States’ Capitol Hill buildings on […]

Home|[in] focus|From the Land Of the Free to the Country Of the Unhinged
Categories: [in] focus 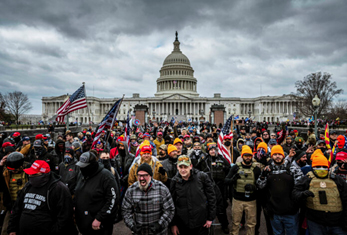 We have asked some of Africa’s leading academics and thinkers to reflect on what the inauguration of a new US president means for Africa. This series is produced In collaboration with the University of the Witwatersrand’s African Center for the Study of the United States.

The storming of the United States’ Capitol Hill buildings on 6 January 2021 by pro-Trump supporters could come straight out of a Hollywood-style action movie script. Four years of a presidency that can only be described as America’s ultimate reality TV — featuring as lead actor none other than Mr Entertainment himself, Donald Trump — had its eventual climax in the Seizure of the Legislature.

Had this taken place in any other country, the US may have sought to intervene, to uphold the principles and norms of a democratic dispensation. But, sadly, it did not. Rather, it was the country labelled as the leader of the free world and the beacon of hope for democratic freedom that was coming unhinged at the seams, more than 30 years after Francis Fukuyama penned his famous The End of History? thesis.

Fukuyama’s assessment of the unravelling of the Cold War and the triumph of Western Liberal Democracy and the free market economic system was all the rage at the time. It was easy to reduce the failure of the Soviet state-led political and economic model to being inferior to the more robust and free-flowing ideology of individual civil liberties and, of course, a minimalist state that enabled the invisible hand of the market. If 1989 represented what Fukumaya described as the “End of History”, the question now is whether we have entered the “End of History 2.0” period.

Perhaps it would be premature to try and place the events of January 6 in an existential debate. But it does compel that the narratives explaining the unprecedented scenes that gripped the US capital be interrogated and understood in terms of the lessons that this poses for the rest of the world.

Although it would be easy to give in to the view that the US has now reaped what it sowed, this approach would be parochial, given the fragile state of democracy across the globe. There are numerous examples to choose from, the latest being the contested electoral outcome in Uganda. The point of departure for most democratic societies is that in as much as democracy may be a necessary condition, the indelible issue is whether it is a sufficient condition. The end result is what transpired on January 6.

The second issue is when the tipping point becomes the implosion of a fomenting populism that turns deadly. The fragile conditions that underpin democratic dispensations are often driven by elitism and selfish interests. This was clearly on display as the “patriots” marched towards Capitol Hill, attempting to frustrate what should have been a smooth process of certifying the electoral college votes that confirmed Joe Biden as the 45th President of the United States.

Trump, after giving the rioters his blessing, drove in the opposite direction to sulk in the Oval Office. He is part of a privileged class that fans the flames of political disruptiveness and then retreats to a safe haven. None of these populist leaders truly value the lives of those who voted for them. If anything Trump should be seen as the real insurrectionist and receive the appropriate state sanction for inciting an insurgency.

By the same measure and perhaps more disconcerting is the bewildering information that is coming to light now that there was chatter on the wires that a threat to the seat of power was being planned. Curiously, homeland security and other state security institutions did not take it seriously. Perhaps there were the Trojan Horses embedded in the bureaucracy, who hoped to use this threat to discredit the Trump presidency and prevent any future prospects of his return to the White House? Or was this a deliberate plan to leave a fractured democracy for Biden to oversee?

Whatever the reasons are behind the threadbare presence of security personnel that was left to deal with the rioters, the truth of the matter is that intra-state instability has become an overarching source of insecurity for democratic states. While the maxim dictates that democratic states do not go to war with each, the converse of that has become a more frightening reality, that the greater threat to democracies nowadays is from within.

With Biden inaugurated, the next 100 days in office will be crucial in getting the Senate to approve Cabinet appointments. But so too will be the impeachment process of Donald Trump, who will be probably described in the history books as the President who went rogue. If there was a single lesson that January 6 should teach us, it is that democracy remains an ideal to strive for, but the road towards its realisation is not always paved with good intentions.

Sanusha Naidu is a Senior Research Fellow at the Institute for Global Dialogue. The views expressed are personal.

This article was first published in the Mail and Guardian:  https://mg.co.za/africa/2021-01-25-from-the-land-of-the-free-to-the-country-of-the-unhinged/