Global co-operation in a Covid pandemic world is vital in meeting the needs of the UN Sustainable Development Goals (SDGs). In 2020 under the Russian Chairmanship, BRICS countries maintained the momentum despite adverse global challenges including the devastating impact of the COVID-19 pandemic. The 12th BRICS Summit culminated in the Moscow Declaration that affirms the […] 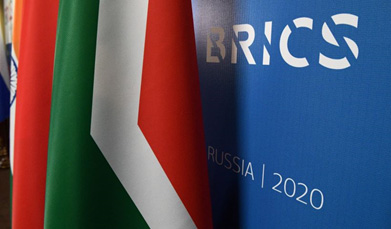 Global co-operation in a Covid pandemic world is vital in meeting the needs of the UN Sustainable Development Goals (SDGs). In 2020 under the Russian Chairmanship, BRICS countries maintained the momentum despite adverse global challenges including the devastating impact of the COVID-19 pandemic. The 12th BRICS Summit culminated in the Moscow Declaration that affirms the commitment of the bloc to multilateralism and mutual respect.

The pandemic has laid bare the weaknesses of the global governance system. The USA has been making excessive unilateral decisions, without regard for the interests of their allies and the rest of the world. Washington thus withdrew from the World Health Organisation (WHO) during the pandemic, and there was not a clear and visible pushback from Brussels against Trump’s rhetoric alleging that Beijing was spreading disinformation about the coronavirus outbreak. Washington has been busy with undermining the BRICS community via unjustified sanctions against Russia, a trade war with China and trying to deepen the alignment of Brazil and India with US foreign policy. Nevertheless, such efforts have yielded minimum results. In the meantime, BRICS countries started providing support to each other and to some of the hardest hit European countries as early as March 2020. South Africa being a part of the bloc received a $1 billion BRICS New Development Bank (NDB) loan to help fight coronavirus. On top of that Pretoria has had close cooperation with the bloc partners on PPE provision, SA citizens repatriation, and virus control/treatment measures sharing.

BRICS membership has elevated Pretoria’s position in the international arena and helped it become a more credible democratic mouthpiece for Africa on global and continental issues. South Africa’s foreign policy agenda is closely intertwined with the bloc’s one at a strategic level. Thus, the country can address the violations of international law and promote its national interests in international fora with the support of its BRICS partners and the Developing South. The bloc supports the reform of international institutions – the UN, World Bank, the WTO, the WHO, and the IMF to promote the interests of all, especially the developing countries. The group’s backing also helped in supporting South Africa’s non-permanent seat at the UN Security Council in 2019-2020, while India has been elected for the term 2021-2022, and Brazil is a candidate for the biennium 2022-2023. BRICS also supports the AU’s commitment to promote the “Silencing of the Guns”, the implementation of the ACFTA agreement, combating the illicit financial flows from the continent, and extending the Debt Service Suspension Initiative for low-income countries.

SA is in a strained economic situation which has been exacerbated by the pandemic. Intra-BRICS cooperation has the potential to boost South African efforts to reconstruct and recover its national economy, dovetailing the operationalisation of the African Continental Free Trade Agreement (AFCFTA).  BRICS countries adopted the Economic Partnership Strategy for 2021-2025 which serves as a key guideline for enhancing cooperation in trade, investment, digital economy, and sustainable development with the special focus on improving the business environment for Small and Medium Enterprises. The opening of the third NDB office – Eurasian Regional Centre in Moscow – will further promote the investment cooperation of the group. So far, the institution has funded about 65 projects totalling $21 billion. By the end of this year, NDB expects approvals to reach $26 billion. There are 9 projects approved for South Africa with the total portfolio worth more than $3 billion. The expansion of the NDB membership will also see SADC members joining the financial institution and attraction of more development capital for Southern Africa.

Apart from being a political and economic group BRICS countries pay due attention to the bolstering of the people -to-people cooperation in the fields of culture, sports, film, youth and academic exchanges. This year saw the establishment of the BRICS working group on culture, organisation of the 5th Film Festival, meetings of youth officials, young diplomats, and scientists. Other informal youth related initiatives include BRICS Youth Energy Summit and cooperation within the framework of the Youth Energy Agency as well as the International BRICSMATH.COM online mathematics competition for students. Events of the kind do not only raise awareness at the grassroots level about the BRICS partnership but also provide the South African community with an opportunity to enhance their human capital in the post-Covid recovery.

Ashraf Patel is the digital data and economy associate at the IGD and is a graduate on the Masters in Management (MM)   Public Policy and Regulation Management (ICT) from the Graduate School of Public and Development Management (P&DM), University of Witwatersrand, South Africa.