Preface The following commentary was published July 30, 2020 on the Responsible Statecraft website of the Qunicy Institute, a relatively new transpartisan, cross-ideological think tank in Washington, D.C. devoted to a foreign policy perspective of interventionist skepticism and restraint. Among other things, the Quincy Institute is opposed NATO enlargement. This commentary was motivated by this […]

by Francis A. Kornegay, Jr. and Arina Muresan

by Francis A. Kornegay, Jr. and Arina Muresan 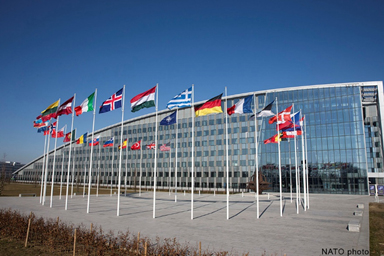 The following commentary was published July 30, 2020 on the Responsible Statecraft website of the Qunicy Institute, a relatively new transpartisan, cross-ideological think tank in Washington, D.C. devoted to a foreign policy perspective of interventionist skepticism and restraint. Among other things, the Quincy Institute is opposed NATO enlargement. This commentary was motivated by this author’s long-held belief that an alternative future for NATO within the dynamic of the continuing post-cold war east-west divide, would be to explore a relationship between NATO and the Shanghai Cooperation Organization (SCO) as the premier platform of non-western Eurasian multilateralism. The ongoing civil war in Afghanistan is emblematic of where these east-west fault-lines intersect in reflecting the geo-strategic landscape upon which such a NATO-SCO peace-building relationship might be explored as opposed to the US unilateral negotiations undertaken by the Donald J Trump administration with the Taliban. These have failed to end Taliban attacks on the Kabul government although recent developments portend talks between Kabul and the Taliban based on prisoner releases although these also raise very sensitive security challenges and implications regarding how these will affect Afghan women. The fact that President Trump wants US troops out of Afghanistan before this November’s election has taken precedence over a genuinely multilateral approach linked to a broader regional stabilization geostrategy. The position taken here is that a NATO partnership with the Sino-Russian led SCO might reflect such a multilateral approach which could begin a transitioning of US foreign policy away from its current global ‘imperial overstretch’ posture at a time when the COVID-19 pandemic has accentuated the need for a US diplomacy and national security strategy predicated on Domestic Renewal. Among other things, this implies major cuts and re-allocations in the American national budget away from Republican military keynesianism toward socio-economic recovery, infrastructure renewal, overcoming inequalities and healing national divisions. However, there has to be a new post-primacy geostrategy accompanied by such a retrenchment predicated on interventionist restraint. This commentary followed a July 28, 2020 webinar held by the Quincy Institute on “Enlarging NATO: Grave Mistake or Vital Cause?”

The zoonotic rupture in the global landscape caused by COVID-19 has radically increased foreign as well as domestic policy stakes in the November elections. In competing against President Donald Trump, presumptive Democratic nominee, Joe Biden is convinced, according to Gabriel Debenedetti in New York Magazine (May 11, 2020), that returning to the status quo ante is untenable.

If elected, Biden, with his $775 billion “Build Back Better” and $2 trillion climate plans, is plotting a presidency that, according to Debenedetti “by awful necessity, he believes must be more ambitious than FDR.” With, in his view, the pandemic impacting America more deeply than the Great Depression, Biden is said to want much bigger public investment well beyond the trillions already spent.

Indeed, given his menu of initiatives and those proposed by others, something along the lines of reviving President Franklin Roosevelt’s Federal Emergency Relief Administration may be necessary. FERA revisited would oversee the magnitude and diversity of federal investment and interventions among states and localities beyond the Hobbesian chaos of the Trump confederacy.

Meanwhile, Senate Republicans are resisting another stimulus in spite of the intensifying corona crisis. They will surely oppose FDR Plus under Biden. However, should Democrats retake both the Senate and White House, revisiting FDR begs questions about balancing domestic and foreign policy priorities.

Here, it is unclear whether Biden will match a leftward domestic policy shift with a similar shift in foreign policy. In some areas he may even become more hardline as with Iran which would be a major mistake. Otherwise, apart from reining in defense spending demanded by progressives and some conservatives and repealing Trump’s mega-tax cuts, a progressive calculus begs questions concerning geostrategy.

First, Democrats must resist joining Trump’s tactical anti-China cold war as partly realized in the National Defense Authorization Act’s Pacific Deterrence Initiative. It also means restarting global de-nuclearization and disarmament talks. Strategy should aim at demilitarizing U.S. diplomacy while de-emphasizing “primacy,” already an objective given. The aim: reversing Trump’s inward looking belligerence at the expense of multilateral relationships, the importance of which are highlighted by the global human and economic impact of the coronavirus.

Perhaps no better place to start would be in winding down post-Cold War East-West tensions playing out in the Middle East, and extending to the trans-Mediterranean, the Indian Ocean Rim, and Indo-Pacific. Here, any demilitarizing revisionism Democrats might pursue should address a revised NATO role minus enlargement.

In transitioning beyond East-West fault-lines, NATO could potentially engage the Sino-Russian-led Shanghai Cooperation Organization. This was originally broached by Zbigniew Brzezinski in his September/October 2009 Foreign Affairs article on NATO’s future. The SCO is not a military alliance like NATO, but both are fraught with contradictions. Yet the SCO may be the interlocutor needed for NATO’s engagement by redressing asymmetries due to the Warsaw Pact’s vacuum creating demise in eastern Europe. This could allow U.S. re-commitment to multilateralism. It could encourage sharing of security responsibilities in a post-COVID reality where the U.S. and others, sufficiently weakened economically, contemplate mutual demilitarization in stimulating domestic recovery. Who can afford an arms race? COVID-19 has already spurred troop drawdowns among some NATO members in Afghanistan.

Moreover, working with the SCO might contribute to NATO transitioning into an alliance evolving into a less expansive reflection of American-led Western hegemony which is at the root of Russian hostility. Engaging the SCO might also encourage politico-military norms of NATO becoming more strategically cooperative in an updated collective security paradigm of U.S.-Sino-Russian cooperation for stabilizing the trans-Eurasian landscape, including extended hinterlands and off-shore maritime domains.

This is where a credible endgame in Afghanistan suggests a potential SCO role. Afghanistan and Iran, which has at least 3.5 million Afghan refugees — and thus unavoidably has a role in any Afghan war settlement — are SCO observer members. Iran’s full membership might be leveraged within the context of Washington re-joining the nuclear deal and lifting sanctions imposed by Trump, with a Moscow-Tehran understanding on Iran’s role in Syria, a reported point of tension. Meanwhile, China and Iran have moved closer. As it is, Pakistan and India are already full members, along with Russia, China, and several former Soviet republics.

Particularly compelling is existence of the SCO’s Afghanistan committee. Why then should the SCO not be in the peace process while leading post-conflict reconstruction? Its absence may be fundamental to the shakiness of the U.S.-Taliban “truce.” The Taliban clearly have no intention of abiding by the deal. That’s apparently okay with Trump who wants American troops out of Afghanistan before November.

But a Biden administration could seek out the SCO, with it as a partner, the Taliban, given their covert Russian links, might be boxed in while strengthening the Kabul government. Further, a NATO-SCO cooperative security agreement on Afghanistan could be further augmented at the U.N. Security Council level between the U.S., Russia, and China. All the more reason a U.S.-China cold war should be avoided. Regarding Moscow, had Brzezinski’s SCO proposal been followed up on, might this not have pre-empted the outrage of alleged Russian bounties for Taliban killing U.S. troops?

Under a Biden administration, the bounty controversy notwithstanding, given how Russia is also impacted buy COVID, Washington could leverage suspending sanctions, making suspension permanent pending an understanding on Moscow’s cessation of hybrid warfare against the U.S. and allies. This should also include China. The three powers should then arrive at an arrangement of managed “coopertition” enabling a more functional UNSC. Otherwise, a NATO-SCO arrangement may not be possible without trilateral accommodation.

This also means conceding Greater Eurasia as a Sino-Russian sphere of interest (if not influence) in tandem with the EU. More substantive burden sharing and flexibility in overcoming East-West peace-building obstacles might be forthcoming. Given the SCO’s Sino-Russian leadership, such an initiative might carry spin-offs in more productive U.S.-Russia-China interactions, possibly even paving the way toward Security Council reform. This, Washington should champion. It would be in the interest of regaining a measure of U.S. leadership credibility while furthering a more U.N.-driven post-pandemic global order.

Similarly, the Syrian-Iraqi nexus might benefit from Security Council-backed NATO-SCO cooperation instead of what has evolved with Turkey and Russia jockeying over Idlib. This has unfolded alongside the humanitarian and refugee crises of regional instability further impacted by COVID-19 though it appears Moscow and Ankara have achieved a degree of understanding that hopefully could eventually extend to Libya as well. As it is, Turkey’s NATO affiliation and Russia’s SCO co-leadership underline the logic of a potential NATO-SCO relationship.

The advantage of such a security nexus is that it could hold potential for reinvigorating a multilateral system that “great power” dynamics have destabilized, contributing to regional inter-state rivalries complicating conflict resolution. Europeans might find a NATO-SCO scenario attractive, while contemplating greater strategic autonomy within an alliance weakened by GOP anti-European bias dating back to the Bush-Cheney years and intensified under Trump. In this vein, the U.S. should join the EU’s Alliance for Multilateralism.

The outcome of a NATO-SCO transatlantic-Eurasian scenario might also be complemented by an Africa-centered Zone of Peace and Cooperation system based on maritime and wide-ranging functional cooperation between continents, including the Mediterranean and Indian and Pacific Oceans as well as that in the South Atlantic. Among other things, this could integrate Africa and the global South more comprehensively into an updated collective security regime for addressing 21st century threats.

Such a revisionist U.S. posture should contribute to freeing up national budgeting space for addressing America’s long overdue and desperately needed domestic backlogs made all the more imperative by the coronavirus. In the process, this might perhaps inspire a new foreign and domestic policy think-tank agenda in deciphering “devils in the details” of such possibilities. Transatlantic-Eurasian multilateralism would only touch the surface of much deeper and broader changes needed in addressing global challenges in the decades ahead.