South Africa and Asean: a Step Closer to Formalising Relations

South Africa and Asean: a Step Closer to Formalising Relations

South Africa is edging closer to formalising relations with the Association of Southeast Asian Nations (ASEAN), a much needed initiative for South Africa to build its focus and strength in the Southeast Asia region, especially in the absence of the New Asia-Africa Strategic Partnership (NAASP) which was envisioned to seek promotion of strategic relations between […] 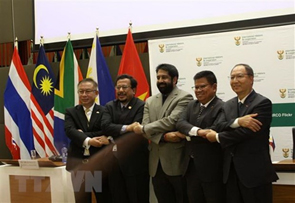 South Africa is edging closer to formalising relations with the Association of Southeast Asian Nations (ASEAN), a much needed initiative for South Africa to build its focus and strength in the Southeast Asia region, especially in the absence of the New Asia-Africa Strategic Partnership (NAASP) which was envisioned to seek promotion of strategic relations between Africa and Asia. However, formalising the relations will depend on the National Assembly approval for South Africa’s accession to the Treaty of Amity and Cooperation (TAC).

On the 10th June 2020, the Parliament’s Portfolio Committee on International Relations and Cooperation welcomed the Department of International Relations and Cooperation (DIRCO)’s bid to join the Treaty of Amity and Cooperation with ASEAN, a step that will formalise South Africa’s relations with ASEAN as a group. The Portfolio Committee gave the green light for the National Assembly to approve the accession.  But why is the formalisation of South Africa’s relations with ASEAN significant and what does this mean going forward?

Why the need to formalise relations

The COVID-19 pandemic has affected and continues to affect economies around the globe with many uncertainties of how things will develop in a post-pandemic world. Thus, while dealing with the current crises of the pandemic, the world is also gearing up for a new normal where nation states might have to reshape their foreign policy trajectories as the impact of the pandemic continues to unfold. Like many countries, South Africa will have to start re-imagining a post pandemic international relations, to find ways of strengthening the existing bilateral relations and rekindling Pretoria’s foreign policy interests where opportunities were missed. Therefore, the formalisation of relations with ASEAN as a group will be one of the great paths to strengthening South Africa’s economic diplomacy in a post pandemic world, a move that will seek to open more channels for South Africa’s economic footprint in the Southeast Asia region. The current trade relations between South Africa and ASEAN countries are predominantly in manufacturing, mining and agriculture. In 2019, South Africa’s exports to ASEAN were just over $2.6 billion with imports around $5.9 billion.

According to DIRCO, accession to the treaty will be beneficial to South Africa’s economic growth, and will also increase trade and undo the negative trade surplus South Africa has with ASEAN countries. Furthermore, DIRCO envisages the partnership with ASEAN to improve access for South African goods and services to the Southeast Asia market.

In principle, the existing diplomatic relations highlight the significance and values of South Africa’s relations with the Southeast Asia region. In a speech by the late President Nelson Mandela during his second visit to Southeast Asia in 1997, he proclaimed that “Southeast Asia is a shining economic example and inspiration for what we (South Africa and the region of Southern Africa) have set out to achieve”. From an ASEAN perspective, relations with South Africa are one step ahead in laying the bricks for a formal partnership. To facilitate these relations, ASEAN created a formal platform and strategic approach including a committee that was established in 2008 known as the ASEAN Pretoria Committee (APC). This is a community of diplomats representing the interest of ASEAN member states in South Africa, consisting of seven ASEAN missions based in Pretoria; namely Indonesia, Malaysia, the Philippines, Singapore, Thailand, Myanmar and Vietnam. The committee is one of the ASEAN Committees in Third Countries and it represents the interests of ASEAN member states in South Africa. In a move to bolster engagement between ASEAN and South Africa, in 2014 the APC pledged to search for ways of increasing cooperation in investments, trade and tourism and to discuss ways of strengthening multifaceted cooperation between ASEAN and South Africa. This had prepared the ground to formalise relations between ASEAN and South Africa.

Firstly, while it will be positive and a strategic move for South Africa to join the Treaty of Amity and Cooperation, Pretoria will need a workable strategy on how South Africa will conduct and benefit from the relations with ASEAN as a group. As DIRCO stipulated in their presentation to the Portfolio Committee, South Africa must focus on identifying under-explored markets in the region which will provide new export opportunities. Currently informed by the value and volume of trade and investment opportunities, South Africa’s economic strategy towards ASEAN mainly focuses on Indonesia, Thailand, Singapore, Malaysia and Vietnam.

Secondly, the accession to TAC will be a significant phase for South Africa’s aspiration to become an ASEAN Dialogue Partner , a formal status conferred through ASEAN Foreign Ministers to non-Southeast Asian nations, also known as ASEAN External Relations. Characterised by regular high-level exchanges and dialogue, including ministerial meetings and summit meetings, elevation of external parties is decided by ASEAN (through consensus) based on the intensity and substance of interactions, as well as the potential for the external party to contribute to the objectives of the Association. Some of the benefits of becoming a dialogue partner includes the promotion of two-way trade and investments; strengthening of socio-cultural links; exchange of views on regional political issues and addressing non-traditional challenges such as terrorism and transnational crimes. For South Africa, this will be an opportunity to seek more economic and development opportunities, provided that Pretoria proves her worthiness through the TAC to be considered capable of becoming a dialogue partner and join the likes of Australia, Canada, China, European Union, India, Japan, Republic of Korea, New Zealand, Russia, United States and recently Turkey as an ASEAN Dialogue Partner.

Mr. Kenny Dlamini is a Research Officer at the Institute for Global Dialogue associated with UNISA. His views do not necessarily reflect those of the IGD