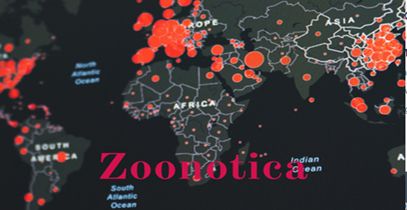 “As the COVID-19 pandemic rages on, killing thousands and crushing the global economy, their potential threat of zoonotic spillover – when novel viruses and bacteria jump from animals to people – is becoming increasingly clear…The virus that causes COVID-19 is just the latest infectious agent to jump from animals to people. HIV, Ebola, Marburg virus, SARS, MERS, Zika – those, too, originated in animals and are part of the same perilous trend of novel diseases that have surfaced with increasing frequency as population growth, industrial agriculture, deforestation, wildlife exploitation, urban sprawl and other human activities bring our species into continuous contact with animal-borne pathogens.”

Despite the fact that in America at least the curve has not really flattened, we are all thinking about when and how things will get back to normal? But we should use this crisis as a way to rethink what normal means. The more closely you look, the more it appears that we human beings have been living in a way that makes future pandemics likely, even inevitable.

‘Zoonotica’ as the proposed name of this series refers to Covid-19 being identified as a zoonotic virus emanating out of circumstances related to unleashing of pathogens made possible by human exploitation of natural habitats and ecosystems. In a sense, man versus nature and nature’s revenge in what primatologist Jane Goodall has referred to as a disease resulting from conditions creating “an opportunity for viruses to jump from animals to humans” against the backdrop of climate change considerations that are indirectly related to such conditions making zoonotic threats possible through ecological degradation. Given the insidiously global pervasiveness of Covid-19 and its impact on virtually all aspects of life as we know it, Zoonotica describes the new global landscape we are all suddenly being ushered into.

The international relations of this pandemic, with its dystopian overtones forces everyone to begin doing a rethink of the global and regional politics and economics of the world we live in and its cultural dimensions that have brought us to this point. While climate change can be evaded in its deniability by those choosing to ignore its reality, the life and death immediacy of the novel coronavirus in all its global manifestation cannot so easily be ignored. Man now comes face-to-face with nature and our alienation from the natural world to which we are now being so harshly and abruptly reintroduced. Hence, welcome to Zoonotica!

True to our institute name of Global Dialogue the current pandemic crisis in all its global magnitude demands a global conversation. This series introduces onto the IGD website an open-ended invitation to international relations scholars, analysts and policy specialists to reflect on the radical change implications the COVID-19 pandemic presents to reality as we think we know it in terms of contemporary politics, economics, science, technological trends and culture as we contemplate the future of the global order. What we are hoping to stimulate with this invitation, is a motivation for contributors to send us ‘think pieces’ about what one sees transpiring as this pandemic unfolds, what it portends for the future along with any recommendations one may have or be thinking through that might help us illuminate future possibilities, prospects, threats and dangers that may lie ahead.

What this pandemic has done, in its insidiously global extent is to bring home the old truth that you cannot fool ‘Mother Nature,’ at least not indefinitely!

The global Covid-19 pandemic may reflect, in international relations terms, what late famed naturalist Stephen J. Gould conceptualized as ‘punctuated equilibrium’ in the periodic disrupting of gradualist incremental change that results in radically altered evolutionary terms and conditions of life on planet earth. Perhaps this may now also apply to how humanity adapts to managing impacts and implications of Covid-19’s disruption of a global culture of capitalist modernity and its attendant system of international relations. This system has already been fast eroding under the stresses and strains of resurgent nationalism and geopolitical great power dynamics undermining the stability of the postwar western liberal international order.

Sooner or later, nature catches up with Homo sapien sapien to remind our species that we humans cannot separate ourselves from the natural world which, inevitably will prevail over our efforts to shape it to our will instead of reconciling our will with its evolutionary logic. As such, we have now arrived at a point where we at IGD feel we need to reflect on the world as we think we know it and where we think (or hope or fear) we might be headed – or where we think we should be headed internationally, on the continent and/or in South Africa in terms of how South Africa relates to the rest of Africa and the world.

The magnitude of the global pandemic appears to mark an inflection point connecting dots forcing an international relations rethink in transition from traditional preoccupations with competitive geopolitical power politics between countries and major powers toward the adaptive imperative of more and deeper global governance. This is a moment emphasizing the urgency of enhanced international cooperation for world peace-building in advancing an agenda of climate change defense in pursuit of an ecologically sustainable world order; one reconciling natural and man-made ecosystems amid a human population projection of 10 billion by 2050. That coronavirus’ destabilization of the global oil market further underlines the magnitude of the geopolitical instability characterizing a moment when international cooperation is most needed but lacking. But the oil collapse also emphasizes the urgency of a fossil fuel transition toward greater reliance on renewable energy. What the coronavirus pandemic and oil market collapse share in common is how, in different ways, they reflect the heightening vulnerability of civilizational modernity tied to man’s exploitation of nature as the basis of world order in the 21st Century.

Environmental degradation, with its ‘Sixth Extinction’ portents (involving the commercial wildlife ‘wet trade’ and illegal trafficking among other exploitations such as deforestation, oceanic pollution, etc.) emerges as the common denominator linking the growing human security threat of out-of-control pandemics with energy-related climate change challenges to the integrity of the global commons. This, in turn, exacerbates prospects of increased resource scarcity-related conflicts between countries as in the Ethio-Egyptian tug-of-war over the impact of the Grand Ethiopian Renaissance Dam (GERD) on the Nile River opening up Afro-Arab fault-lines in place of what used to obtain as Afro-Arab solidarity. Similar riverine resource-related challenges in the global South are unfolding in South and East Asia dominated by the transnational and interregional implications of ‘emerging power’ development agendas of China (affecting the Mekong Delta) and India (the Himalayas) and other non-western states.

Deforestation fires interacting with droughts coupled with illegal logging in Southeast Asia, Central Africa, Madagascar and in South American Amazonia (also motivated by ‘emerging power’ capitalist developmental calculus) also contribute to this grim global South environmental security challenge. It extends to the increasingly devastating annual wildfires and flooding in Australia, all the way across the Pacific to coastal California amid seasonal heat-waves alternating with winter mega-storms throughout the global North. These in turn are accompanied by disaster-threatening cyclones and hurricanes emanating from rising ocean temperatures amid fast melting Arctic ice sheets. All combined, these environmental threats and calamities contribute to an exponentially existential environmental and human security crisis greatly complicating and overwhelming unresolved traditional threats emanating from inter-state and great power tensions and conflicts.

The global coronavirus pandemic cutting across East-West and North-South geopolitical-strategic divides and engulfing all major great power state actors among the US, China and Russia alike as well as Middle Eastern rivals in the Persian Gulf among Iran (as regional epicenter of the virus) and Saudi Arabia coupled with the conflict system embracing Syria, Iraq and Afghanistan contributes to a compounded complexity of challenges to global stability. These are now overshadowed by the pandemic but extend from Euro-Eurasian fault-lines involving Turkish-Russian maneuvering in Syria all the way into the continental-maritime dynamics of Sino-Indian rivalry in the Indian Ocean (extending into Indo-Pacific maneuvering between China and the US), not to leave out Red Sea interregional dynamics of Persian Gulf intrusions into the Horn of Africa interrelated with the war in Yemen while the Mediterranean witnesses resource motivated Turkish-Russian maneuvering in Libya’s civil war as well as in a destabilized North Africa extending into Sahelian West Africa.

Meanwhile, the entirety of sub-Saharan Africa’s fragmented geopolitical landscape is hard put to contain external powers scrambling for position on a resource-rich continent struggling to integrate by a dysfunctional interdependence predicated on the ‘national sovereignty’ of AU member states. Here, an African developmental diplomacy of managing external influences by knitting together trilateral development cooperation frameworks in place of ‘every man for himself’ bilateralism with its ‘divide and rule’ implications reinforcing Africa’s fragmentation just might illuminate multilateral pathways toward advancing African integration. Such a scenario just might position Africa for what could be its increasing centrality in the latter half of the 21st Century.

Within the larger global context, Africa has to mobilize itself to discover a regime of transition toward a new food security paradigm calibrated with its rapid urbanization in a world where an estimated 70 percent of humanity will be urban instead of rural, thereby suggesting possibilities for a sustainable recovery in the balance between natural and man-made ecosystems. However, this all hinges on a new international relations understanding of the fast changing 21st Century reality animated by a much needed global dialogue in navigating these unchartered waters.

In pursuing such a dialogue, this conversation of reflection and discerning the future is not intended to be limited to South Africans or to Africans only. It is intended to elicit thoughtful submissions from contributors the world over. All we ask is that you submit contributions of between 500-1500 words to Mr. Kenny Dlamini via email (kenny@igd.org.za) for uploading to our website for monthly posting. In addtion to written contributions, submissions in audio and video formats are also welcome.

[1] “Environmental Destruction Brought Us COVID-19. What It Brings Next Could be Far Worse: A virus that originated in animals has upended life across the globe. But the next deadly pandemic could make this look like a ‘warmup’,” Huffpost, April 21, 2020.