Donald Trump’s possible impeachment: what it means for his 2020 bid

Donald Trump’s possible impeachment: what it means for his 2020 bid

The US president Donald Trump has had trouble for most of his presidency; reports of collusion, blurring the lines between family business and his political position, and systematic erosion of institutions. These could affect his bid for a second term as president in 2020. Of the several calls for impeachment during Trump’s first presidential term, […]

Home|[in] focus|Donald Trump’s possible impeachment: what it means for his 2020 bid
Categories: [in] focus 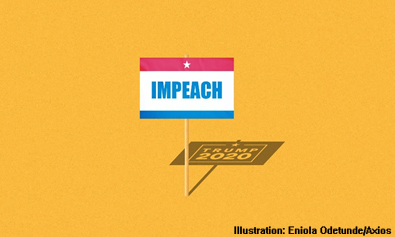 The US president Donald Trump has had trouble for most of his presidency; reports of collusion, blurring the lines between family business and his political position, and systematic erosion of institutions. These could affect his bid for a second term as president in 2020. Of the several calls for impeachment during Trump’s first presidential term, the latest efforts by the House of Representatives on the president were sparked by a phone call conversation between Donald Trump and the newly elected Ukrainian president Volodymyr Zelensky on July 25, 2019, which is suspected to have breached public trust by the president. Mr Trump has not been charged with impeachment, but investigations are underway to determine if the US president abused his power as president. The question now is will the inquiries lead to a successful impeachment plea by the House of Representatives? Moreover, what will this mean for Trump’s bid for the 2020 presidential elections?

The impeachment is a process proceeded by the House of Representatives to uphold the US Constitution in a case of irregularities by the president, vice president and civil officers. The process to inquire and impeach depends on the nature of the crimes as stipulated in the US Constitution, articles of impeachment. The US constitution gives way for the House of Representatives to make a formal accusation to impeach a president on crimes such as bribery, treason, or other high crimes and misdemeanours; and a successful impeachment needs a two-thirds majority to remove a president.

The controversial US president Donald Trump has had a number of impeachment calls since his administration and none of the accusations has led to an actual impeachment process by the House of Representatives. The speaker of the House mentioned a formal impeachment inquiry was to be launched against Donald Trump after a phone call with Ukraine president was suspected to abuse his power as president. Mr Trump is accused of pressurizing the newly elected president to investigate and find incriminating information against Joe Biden, one of his possible opponents for the 2020 elections. A number of Democrats believe the president will survive yet another impeachment call. After months of distancing themselves and keeping silent regarding a possible impeachment against Trump, the Democrats and the speaker, Nancy Pelosi launched a formal inquiry against the president on Tuesday, 24 September 2019.

The latest impeachment attempt against Mr Trump comes in the wake of continuous campaigning and debates in preparation for the 2020 US presidential elections, and a number of the Democrats have used their platforms to discredit Trump and point out to the type of corrupt leader he is. One of the Democrats has weighed in on Trump’s possible impeachment calls by stating that the information captured from the conversation between Trump and the Ukraine president was not aimed at protecting or advancing America’s interests but a ‘political favour’ for Trump. How has the public reacted to Trump’s possible impeachment?                         A number of US citizens support the call for the president to be impeached; a recent poll conducted by Fox News suggests that 51% support removing Trump, while 40% opposed his removal from office.

Surprisingly Trump’s loyal supporters have remained unmoved and have hardly shifted their support throughout his presidency, and it has therefore remained around 40 percent irrespective of what controversies have emerged.

If the president is found to have abused his power, as stipulated in the constitution, all eyes will be on the impeachment process and the two-thirds majority vote. The continued inquiry and investigations could lead to the House formally charging the president with articles of impeachment, leading to trial by the Senate that is controlled by the Republicans, and this may lead to a dismissal of the trial by the Republicans.

Therefore, with the election campaigns and debates underway the world will be watching to see how US politics will unfold with a possible impeachment on the way. With the impeachment set to dominate the 2020 US elections both the Republicans and Democrats should ready themselves for any possible outcome, because a president does not always need to be impeached but they can resign like President Richard Nixon on August 9, 1974. Past unsuccessful impeachment processes in the US have assisted in emboldening presidents and maintaining their influence, through using the opportunity of a failed impeachment to rally more support and timely dragging down opponents who were seen to taint their image. If Trump survives the impeachment process, it presents an opportunity for him to rewrite history by becoming the first US president to survive an impeachment and be re-elected for a second term come 03 November 2020. Only time will tell if this will be an opportunity for Trump or the Democrats as the 2020 elections draw closer.

Mr Simphiwe Mongwe holds a BA Hons in Politics and International Relations from University of Johannesburg and is a research assistant at the Institute for Global Dialogue associated with UNISA. His views do not necessarily reflect those of the IGD.