China’s ambitious Belt and Road Initiative (BRI) is set to connect over 65 countries at a cost of approximately $1 trillion, with the aim of improving the connectivity between China, Asia, Europe, the Middle East and Africa in a process closely linked with the domestic changes in the Chinese economy. Proposed by President Xi Jinping […] 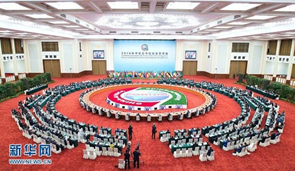 China’s ambitious Belt and Road Initiative (BRI) is set to connect over 65 countries at a cost of approximately $1 trillion, with the aim of improving the connectivity between China, Asia, Europe, the Middle East and Africa in a process closely linked with the domestic changes in the Chinese economy. Proposed by President Xi Jinping in 2013, the initiative is developing a vast network of railroads and shipping lanes between China and countries along the continental belt and maritime road.

The following article, based on my recent plenary address at the 8th China-Africa Think Tanks Forum in Beijing argues that the responsibility ultimately lies with African stakeholders at the state and non-state levels to cooperate with China in a manner that enhances African priorities. While bilateral relations remain integral to Africa’s international relations, the continent could use the BRI to support its regional continental and maritime interconnectivity projects agreed to by the regional economic communities and the African Union (AU). The increased coordination would assist in enhancing African agency and build capacity for implementing regional infrastructure projects. In a nod towards this direction, the first mid-year coordination meeting of the AU and the Regional Economic Communities (RECs) was held in July 2019 in Niger, in a move that aims to build greater cohesion and coordination across the continent. The AU Representative Office in Beijing is now also up and running, and should be able to assist in coordination efforts in the Chinese capital on sustainable projects that serve as catalysts for African development.

Recent years have seen efforts by the African continent to exercise greater agency and ownership in pursuing its development efforts. This aspiration is captured in Agenda 2063, the African Continental Free Trade Agreement (AfCFTA), and priorities identified in the report on the proposed recommendations for the institutional reform of the African Union, which was presented to the 31st Summit of the AU in 2018. What these initiatives have in common is a contemporary effort to identify and act on African priorities, and thus spearhead an endogenous development effort on the continent. If African countries, especially those that wield greater influence prioritise the identified areas in Agenda 2063, they will create greater cohesion in the continent’s international relations, enhancing African agency in partnering with China and other countries along the Belt and Road. The World Bank estimates that Africa needs up to $170 billion in investment a year for 10 years to meet its infrastructure requirements. The African Development Bank has posited that if Africa positions itself well, it can source some of this from the BRI and channel it to the African Union’s infrastructure master plan, the Programme for Infrastructure Development in Africa (PIDA). African stakeholders must also decide how to partner with China on the implementation of some of the 12 identified flagship projects of the AU.

Much of the funding for the Belt and Road Initiative (BRI) comes from policy lenders, with the more prominent ones including the China Development Bank and the Export-Import Bank of China (Exim Bank), which have committed over $1 trillion. There is also a Silk Road Fund, which holds $40 billion in investment funds and is supervised by China’s Central Bank. The Asia Infrastructure Investment Bank is also an important player and has a capital base of $100 billion. Advocates of the BRI point to the potential increased private Chinese investments in tourism, real estate, and agriculture, alongside infrastructure projects. The BRI is also increasingly seen as a catalyst for African regional economic integration and competitiveness as seen in research funded by the United Nations Economic Commission for Africa, which found that East Africa’s exports could increase by as much as $192 million annually if new BRI projects are used diligently. The African continent is strategically located along Beijing’s important supply lines, ensuring the existence of mutual interests. Indeed as the Indian Ocean grows in importance, it is imperative that African countries and regional economic communities ensure that they safeguard the continental and maritime space in a manner that enhances their development interests.

It is equally important to understand that while African countries, especially those along the Indian Ocean perimeter, will be important for China’s strategic calculations, there will be no automatic flows of capital from China. Indeed while some projects will be seen to have more than just an economic rationale for China, factoring in geopolitical calculations, many of the projects financed will have to be of a sound nature and seen to be profitable over the medium to long term, especially following greater scrutiny of BRI projects and President Xi’s recent rhetoric on quality, transparency, and sustainability during the recent BRI Forum in Beijing. Indeed given the importance of Central Asia and Southeast Asia for China’s strategic calculations, it will be important for African countries to look towards greater co-ordination of their efforts through the AU and the RECs.

While China no doubt leads the BRI, opportunities will be created along all of the countries on the ancient routes, providing opportunities for those countries that are better organised at the state and non-state levels. It will also be important for African stakeholders to increase their own maritime capabilities and be prepared to mediate in their interests when tensions amongst the great powers flare up from time to time.

Realising these opportunities will require co-ordination, continued dialogue and research on various levels. It will also require the research community, through think tanks and universities across the African continent to conduct more empirical research in partnership with Chinese institutions and embassies. This is important to ensure that throughout the implementation and identification of BRI projects in Africa, the research community understands the perceptions of various actors towards China and the BRI projects. This can act as an early warning mechanism where there is discontent and allow for multiple stakeholders to discuss research findings related to the BRI and Africa. Supporting research that seeks to monitor and evaluate the ongoing partnerships will assist in ensuring that policy is based on evidence. The aim would thus be to maximise the positives while minimising the potential negatives and creating spaces for multistakeholder engagements that assess the partnerships and projects as they unfold.

Dr. Philani Mthembu is Executive Director of the Institute for Global Dialogue, associated with UNISA. This article was adapted from recent address during the 8th China-Africa Think Tanks Forum in Beijing. It was originally published by Pretoria News on the 3rd September 2019, available on https://www.pressreader.com/