The week of September 2 2019 may go down as a watershed moment in SA, on a par with Marikana. It was an extraordinary week of anti-immigrant violence and femicide just as SA was hosting the World Economic Forum (WEF) Africa summit in Cape Town in the run-up to its chairing the AU next year. […]

Home|[in] focus|Xenophobia is the tip of an iceberg that all African nations should confront
Categories: [in] focus 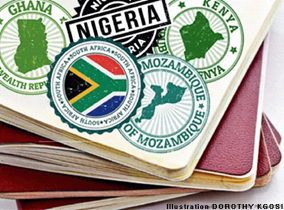 The week of September 2 2019 may go down as a watershed moment in SA, on a par with Marikana. It was an extraordinary week of anti-immigrant violence and femicide just as SA was hosting the World Economic Forum (WEF) Africa summit in Cape Town in the run-up to its chairing the AU next year.

This may explain the cynical maliciousness in how some AU member heads of state have exploited the events of early September. They do not like the idea of SA dominating as Africa’s most advanced economy (though they don’t mind shopping in Rosebank and Sandton).

The toxic postapartheid cocktail of foreign African influx into SA, amid the country’s acute unemployment and poverty challenge, exacerbated by a national service delivery crisis, combined with weak law enforcement, amid penetration of African and international criminal networks, all contributed to igniting a time-bomb that was just waiting to explode.

And explode it did. The timing of this convulsion could not have been more unfortunate for President Cyril Ramaphosa and his administration’s “new dawn” agenda, which is intended to revive the continental and global traction SA has lost over almost a decade of state capture and rampant misgovernance. In many respects, this background forms a relevant context for what goes by the label xenophobia.

What was particularly extraordinary about this period was the magnitude of anti-SA outpouring from much of the rest of Africa: from Nigeria’s preposterous over-the-top manufactured outrage to Rwandan President Paul Kagame boycotting the WEF, Malawi’s call on the AU and Southern African Development Community (Sadc) to hold SA accountable, and reprisals against SA businesses in Zambia and the Democratic Republic of Congo.

This backlash says as much about the rest of Africa and this continent’s serious lack of pan-African consciousness and engagement as it does about SA’s own pan-African deficits. These need urgent pondering as SA prepares for the AU in 2020.

SA did not deserve this retribution from the rest of the continent, but Ramaphosa and the country are reaping what postapartheid SA has been sowing almost from the beginning of its transition. SA’s leaders have consistently avoided assuming a decisive leadership role in the region and throughout the continent for fear of being perceived as “Big Brother” dominating its neighbours in the aftermath of years of Afrikanerdom’s destabilisation during the liberation struggle.

SA’s approach to the rest of Africa is highly ambivalent. Even when other AU members welcome SA’s leadership, they are also ambivalent about SA — especially Nigeria, which sees itself as the continent’s natural leader, and members closer to home in Sadc. Do we not detect a certain jealousy and envy over SA’s status as the continent’s most developed economy, wishing it ill because it will not allow their nationals free rein to take advantage of our lax law enforcement?

To be sure, SA has been actively engaged in the peace and security affairs of the continent. Its businesses are heavily invested throughout Africa as the natural hinterland of our economy. But SA’s leaders in and out of the government seem easily intimidated by other African assertions of what SA owes the continent for all the support given to the liberation struggle throughout the years of apartheid, even though that support may have been more symbolic than genuinely “frontline”.

SA’s liberation struggle received overwhelming African support. But so did liberation struggles in Zimbabwe, Namibia, Angola and Mozambique, especially from the “frontline states”, which suffered grievous destabilisation. So what do Swapo, MPLA, Frelimo and Zanu-PF owe the rest of Africa? Must black South Africans, especially, be expected to apologise for apartheid regime depredations while allowing themselves to be browbeaten into impotence about exercising this country’s natural leadership as a regional power?

Perhaps this is why Tshwane lacks a strategic regional and continental integration strategy. Among other things, it might address migratory flows into the country within the context of a long-term plan of transforming the Southern African Customs Union (Sacu) from a one-sided transfer union into a political federation, perhaps jointly led by SA and Namibia.

As a subcontinental state, SA is already de facto Southern Africa, in need of turning de facto into de jure, in the same manner as the EU has expanded its membership. As next year’s AU chair, SA should propose regionalising the African peer review mechanism for such a purpose. As it is now, the mechanism has no leverage — let’s give it some.

This would allow SA to take the lead in developing regional migration management strategies with Sacu and Sadc member states and with other regional economic communities. This would enable a complex range of criminality threat perceptions and realities to be addressed directly, while also addressing how the cross-border free movement of people can advance implementation of the African continental free trade area.

Xenophobia is simply a buzzword, the tip of the iceberg of a much bigger and infinitely more complex problem all African countries must individually and collectively confront, rather than the rest of Africa hammering SA. It was therefore a breath of fresh air to hear international relations & co-operation minister Naledi Pandor advising Nigeria, which is hard put to contain Boko Haram, to assist in tackling the reality and perception held by many South Africans of Nigerian involvement in criminal activities, including drug-dealing and human-trafficking. Nigerian criminal network challenges are well known internationally, even as many skilled and law-abiding Nigerians and Africans from elsewhere on the continent are making critically important contributions to SA’s society.

But Nigerians should not be singled out and/or single themselves out in a fit of manufactured righteousness over how some of them have been treated. Much closer to home, Mozambique has long served as a major entry point for drug trafficking emanating out of South Asia into SA, based on a comprehensive study conducted by the London School of Economics. Mozambique also serves dubiously as a “frontline” state in the Chinese- and Vietnamese-orchestrated wildlife poaching that is devastating SA’s biodiversity.

These activities, whether Nigerian, Mozambican or other African, also implicate corrupted SA law enforcement, which has to be factored into the grass roots vigilantism that has accompanied many an outbreak of violence in SA’s impoverished communities, deprived as they are of competent and predictable service delivery.

The incidence of Nigerian, Congolese and other African (including SA) involvement in dubious “religious” activities of exploitation are well known and have been well reported. Reports of alleged Sino-Ethiopian collusion in illegal business and trading transactions in the Johannesburg CBD also fit into this complex matrix of corrupted and lax local law enforcement and foreign illegal trafficking in a range of illicit goods interacting with local deprivation and unemployment among South Africans, who feel ignored and marginalised in how their concerns are accommodated — or not.

SA media treatment of purported xenophobia often compounds the problem in its often ill-informed simplicity, lack of balance and one-sided presumption of SA guilt in all instances.

As SA goes into 2020, when it is to chair the AU, the first week of September 2019 should prompt a sense of urgency in how it comes to terms with the complex challenge of anti-immigrant violence, including recognising that it involves far more than just xenophobia. Failing to deal with the issue properly is undermining SA’s credibility on the continent, which is linked to an absence of SA self-confidence in its expected vanguard role in the region and the rest of Africa.

The article was first published in Business Day, 16 September 2019.