by Malancha Chakrabarty and Abhishek Mishra

by Malancha Chakrabarty and Abhishek Mishra 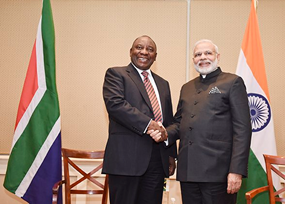 Cyril Ramaphosa’s visit to New Delhi as the Chief Guest on India’s Republic Day on 26 January this year was very special for both India and South Africa. While India celebrated its 70th Republic Day and the 150th birth anniversary of Mahatma Gandhi, South Africa is celebrating the 100th anniversary of Nelson Mandela. Ramaphosa is the second South African President to be the Chief Guest at the Republic Day celebrations. Twenty-four years ago, shortly after the end of the Apartheid regime, Nelson Mandela came to India as the Chief Guest at the Republic Day celebrations in 1995. In 1997, the two countries signed the Strategic Partnership or the Red Fort Declaration. In Mandela’s words, “the Red Fort Declaration is a clarion call for the developing world to mobilise resources in support of a new agenda aimed at economic development and growth, harmony, and unity amongst nations of the South.” Since the Red Fort Declaration, bilateral ties between the two countries have grown stronger and the two countries have MOUs in practically all areas. During his visit, President Ramaphosa renewed the Red Fort Declaration with the Three-Year Strategic Programme of Cooperation (2019-2021) which aims to boost cooperation between the two countries in a time bound manner.

Although Ramaphosa’s visit was of high symbolic value and generated a fair amount of enthusiasm in both the countries, it is important to reflect on what the visit meant in actual terms. The three-year action plan aims to give a big boost to economic relations between India and South Africa which have so far belied expectations. Bilateral trade between India and South Africa currently stands at about US$ 10.7 billion, half the target of US$ 20 billion set for 2018. India’s exports to South Africa plummeted from 2013 onwards (see figure). The year 2017 witnessed a recovery but the value of Indian exports is still much lower than the peak of US$ 5.7 billion in 2013. As shown in figure, Indian imports from South Africa experienced a sharper decline from 2011 onwards. There was a recovery in 2017 but again India’s current imports from the country are much less than the potential. There is an urgent need for both the countries to address the decline in trade.

One of the main reasons behind the slow growth in trade volumes is the lack of direct flights between the two countries. Business travelers in both countries have long lamented the lengthy travel via other countries to reach South Africa as a barrier in trade and investment. Businesses have also been requesting for a more relaxed visa regime. Under the current visa regime, businessmen, academics, and top executives are currently allowed a maximum stay of four years per visa. India and South Africa urgently needs to sign a bilateral agreement on visa arrangements which will allow CEOs and CFOs to stay longer since inter-company transfer of skills is a difficult task.

Some initiatives such as the ‘India-South Africa Business Summit’, ‘Invest in India Business Forum’, the formation of the Joint Working Group on Trade and Investment MoU between ‘Invest South Africa’ and ‘Invest India’ have the potential to boost trade and investment links between the two countries but sincere efforts must be made by both the governments to address the concerns of investors. Some of the major concerns of Indian investors are inadequate infrastructure, poor internet connectivity, uncertain supply of electricity, and delays in procuring visas. President Ramaphosa has agreed to simplify the visa process but other concerns with regard to infrastructure also need to be dealt with swiftly.

While South African investments in India are small in number, they are value-added investments, concentrating in sectors like banking, financing, and healthcare. Just like Indian banks in South Africa operate with full licenses, the same needs to be reciprocated for South African banks operating in India, especially after improvement in the ease of doing business in and ongoing market reforms in India.

In addition to trade and investment relations, closer defence and security ties featured prominently in during the talks. As two major regional powers strategically located in the Indian Ocean, cooperation between India and South Africa is indispensable for maintaining peace and security in the Indian Ocean Region. An increase in both bilateral and trilateral naval cooperation through India-Brazil-South Africa Maritime (IBSAMAR) naval activities, and developing synergies within Indian Ocean Naval Symposium (IONS) will be a step in the right direction. Also, the participation of the South African National Defence Force in the first multinational Africa-India Field Training Exercise-2019 (AFINDEX-19) will help the two forces understand each other’s functioning. India and South Africa are also looking towards the manufacturing of defence hardware under the ‘Make in India’ initiative. With the lifting of the ban on South Africa’s state-owned defence company, Denel SOC Ltd, there are higher chances of collaboration on this front. 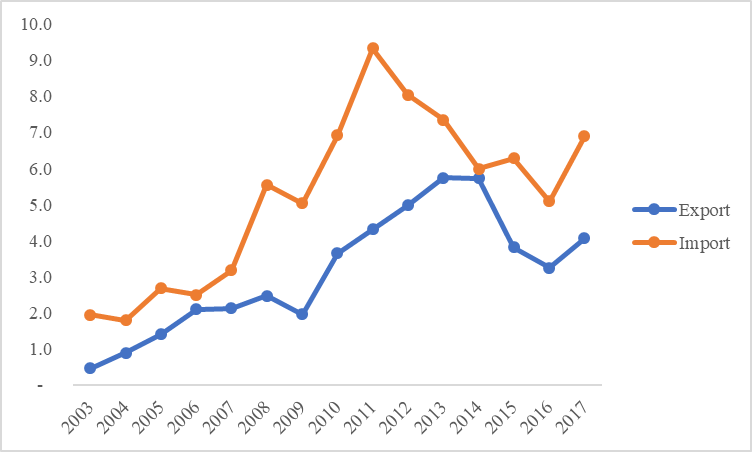 However, the continuous decline in exports and imports is an area of major concern. High profile visits by Heads of State albeit carry a lot of significance in international politics, but bad economics can never be good politics. Therefore, the first and foremost priority for both the countries is to reverse the slide in trade and address the issues faced by the investors. With elections concluded, in India and South Africa respectively, it is hoped that the newly elected governments will focus on expanding economic relations between the two countries.