A United Nations Security Council Plus: A Role for the NAM

A United Nations Security Council Plus: A Role for the NAM

The current landscape of international turmoil in the Middle East and South Asia, as well as in the southern Caribbean or Andean region of South America raises a number of questions about the woeful inadequacy of the global security architecture starting with a United Nations Security Council (UNSC) hobbled by the conflicted US-China-Russia triangle. As […]

Home|[in] focus|A United Nations Security Council Plus: A Role for the NAM
Categories: [in] focus 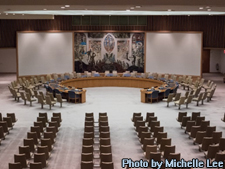 The current landscape of international turmoil in the Middle East and South Asia, as well as in the southern Caribbean or Andean region of South America raises a number of questions about the woeful inadequacy of the global security architecture starting with a United Nations Security Council (UNSC) hobbled by the conflicted US-China-Russia triangle. As such, there are a number of reform caveats that should at the very least be given some serious thought and feasibility policy research and analysis as a means of moving beyond the current impasse on solutions to serious security challenges. This may mean rethinking the utility of presumed moribund institutions and drawing upon them as diplomatic options for overcoming stalemates at the Security Council level which reflect wider geopolitical dynamics among the P3 versus P2.[i] This is where revisiting the Non-Aligned Movement (NAM) as a multilateral platform could serve a purpose at this time of global geopolitical fluidity. Given neo-cold war tensions between Washington on the one hand and Moscow and Beijing on the other, renewed relevance of the NAM returns to the global calculus.

The US-China-Russia geopolitical stalemate on the UNSC renders it, for the time being, pretty much inoperable in promoting global peace and security. Furthermore, this triangular standoff between the US and allied UK and France among the P5 on the one hand, and Russia and China on the other is reinforced by heightened post-cold war east-west tensions reflecting ‘camps’ on either side reinforcing polarization. As such, a quasi-cold war atmosphere bedevils conflict resolutions on major security challenges. This situation is such as to revisit a reinvigorated NAM as a buffer between what amounts to US-led western and Sino-Russian led sub-orders in arriving at possible stabilizing interventions in crisis situations threatening regional destabilization.

For example, A UNSC-NAM nexus wherein the UNSC and/or UN Secretary-General (UNSG) can turn to the NAM to orchestrate multilateral interventions of humanitarian interposition in crises, such as recently existed between Caracas and its neighbours in getting US-delivered humanitarian aid to desperate Venezuelans. This should extend to negotiating an eventual political transition. As the situation stood during the Colombian border standoff during February neither coalition of countries backing Nicolas Maduro, acting president, or Juan Guaido, US-backed opposition leader, in their dual legitimacy crisis enjoy credibility for bridging this humanitarian crisis. Mexico’s ‘neutrality’ and support for a negotiated breakthrough is suggestive of a potential non-aligned coalition of multilateral forces that might eventually be mobilized from within the NAM to facilitate a Maduro-Guaido accommodation or liaise humanitarian relief interventions at the territorial borders between Venezuela and its neighbors, Brazil and Colombia to alleviate suffering. Here, the NAM, on behalf of the UNSG and the UNSC, could establish trans-border Humanitarian Relief Zones, pending resolution of the internal Venezuelan political crisis. However, the manner in which the Trump administration has politicized this crisis for its own domestic purposes compromises the Guaido-led opposition.

From the vantage point of American domestic politics, the situation in around Venezuela stands to benefit no other than Donald Trump and the Republican Party’s electoral 2020 calculus in retaining Florida in the GOP column in cahoots with Senator Marco Rubio. This will be at the expense of post-imperial US-Latin American relations to the detriment of hemispheric peace and stability – and a more progressive politics in the US which, in turn, could potentially benefit a more positive multilateralist diplomacy out of Washington. Both Maduro and Guaido in different ways play into the Trump-Rubio agenda:  renewing the reactionary anti-Castro Cuban electoral base in Florida by reversing Obama’s normalizing of relations with Havana – and ignoring Cuba’s post-Castro transition. Brazilian President Jair Bolsonaro’s bandwagoning with Trump reinforces this US domestic-hemispheric right-wing resurgence. However, Venezuela is not the only regional battleground defying the world’s woefully inadequate and overwhelmed security architecture.

Another possible UNSC-NAM collaboration point pivots on the geopolitics of renuclearization and NAM revival. The Trump administration turning its back on the Iran nuclear deal offers context to the global re-emergence of nuclear geopolitical instability in the Middle East and South Asia. Given the Trump administration seeking nuclear relations with Saudi Arabia while pulling out from the Joint Comprehensive Plan of Action (JCPOA), the art of the non-deal diplomacy with North Korea, as well as recent re-escalation of hostilities between India and Pakistan over Kashmir, the norms in the NAM’s Nuclear Free Zone diplomacy may need another look. The NAM could reinforce European Union, China and Russian support for JCPOA. This also brings back into relevance the establishing of Zones of Peace and Cooperation, which takes on a sense of urgency in the global South’s geopolitical-strategic calculus. Ideally, however unlikely, a joint UN Secretary General-NAM initiative could be considered. This would persuade NATO and the Shanghai Cooperation Organization (SCO) into negotiating a non-aggression partnership for stabilizing the trans-Eurasian landscape given that both India and Pakistan are SCO members.

Such an initiative could give renewed impetus to the Middle East nuclear free zone advocated by Egypt complementing the African Union Nuclear Free Zone Treaty, with Cairo currently chairing the AU and followed by South Africa in 2020. Forebodings of a renuclearizing military arms race in the Middle East and South Asia calls for a NAM revival of the Indian Ocean ‘zone of peace and cooperation’ (IZOP). This kind of arrangement would complement the existing South Atlantic platform, both inspired by the NAM’s UN anti-nuclear and anti-imperialist diplomacy in the early 1970s. The existing Zone of Peace and Cooperation in the South Atlantic (ZPCSA) as an Afro-Latin multilateral platform was established under Brazilian leadership, to which South Africa is a member among other AU members. Of course, revisiting an Indian Ocean oriented version would have to factor in already existing regional and out-of-area nuclear weapon state realities. The focus would have to shift from denuclearization to non-proliferation in avoiding a nuclear arms race in and around the Indian Ocean Rim. There is no way either India or Pakistan can be expected to denuclearize. Yet it is in everyone’s interest that Iran continues committed to the JCPOA, while Saudi Arabia’s nuclear ambitions are resisted by the international community, and nuclear weapons state transparency should also be required of Israel.

There is a continuing role for the NAM with the prospect of it being factored into peace and security equations with the UNSC, as well as within the General Assembly. Such a prospect once again raises reforming Security Council membership itself with an interim five year rotational seat option for emerging powers; this can include some members of the NAM, and others like Germany and Japan that are members of the G7. Among other things, herein might also reside leverage for finally defusing Kashmir given India’s Security Council aspirations. This will be explored in a later commentary. Meanwhile, the apex of global security should not be left undiluted to the tender mercies of a P5 pursuing their 19th century Great Games of one-up-manship at the expense of the rest of humanity while climate change emerges as the overriding threat perception. Hence, the need for a UNSC Plus in pursuit of sustainable World Peace Multilateralism.

Francis A. Kornegay, Jr. is a Senior Research Fellow at the Institute of Global Dialogue associated with UNISA, a member of the JIOR international editorial board and a past fellow of the Woodrow Wilson International Center of Scholars. The views expressed are those of the author and do not represent IGD/Unisa policy

[i] UNSC permanent five (P5) members are popularly juxtaposed according to interest areas or likely voter behavior or support on resolutions; the P3 consists of France, UK and USA, and the P2 consists of China and Russia.