It remains to be seen if the Trump administration will go through with its threat to cut aid to South Africa as recently reported. This would be primarily because South Africa voted against the US in the UN, opposing a US resolution declaring Jerusalem Israel’s capital. For good measure, Washington refused to exempt South Africa […] 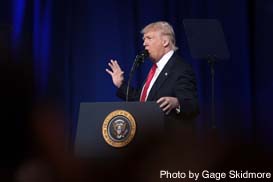 It remains to be seen if the Trump administration will go through with its threat to cut aid to South Africa as recently reported. This would be primarily because South Africa voted against the US in the UN, opposing a US resolution declaring Jerusalem Israel’s capital. For good measure, Washington refused to exempt South Africa from ‘trade war’ tariffs on steel and aluminum which, according to Business Day could cost South Africans 7500 jobs.

Clearly South Africa is ‘Beloved Country’ no more in Trump’s Washington! Apart from the notion of penalizing South Africa as among states more likely to vote against the US at the UN being a blatantly imperialist display of bullying on the basis of Tshwane joining most other UN members in opposing indefensible pro-Israel/anti-Palestinian policies, such a prospect also intersects a number of converging dimensions in US-Middle East policy.

This convergence has the potential to generate an anti-apartheid activist remobilization linking the liberation of black South and southern Africans and the unfulfilled liberation of Palestinians from an increasingly apartheid-like yoke of oppression under an increasingly autocratic settler-dominated Israeli regime. Such linkage need not stop there given Saudi Arabia’s inclusion as a key alliance partner with Washington and Tel-Aviv against Iran and an Iran Nuclear Deal the Trump administration has already violated.

Trump’s problem with the nuclear deal is simply this: his predecessor, President Barack Obama did it and neither Israel nor the Saudis like it and prefer confrontation instead of diplomacy between the US and Tehran. Never mind how this resonates in the North Korea ‘denuclearization’ sweepstakes. What Trump’s policy of basing bilateral diplomacy on US-UN Ambassador Nikki ‘taking names’ Haley’s UN Voting Practices Report boils down to is an exercise in coercive diplomacy: to bully key regional states in different parts of the world into an America First imperium anchored in an anti-Iranian sectarian geopolitical alliance with Israel and Saudi Arabia.

Such interlinkages in any American-based and/or international campaign of resistance to Trumpian Cascades in the foreign policy realm holds out the potential for very real SA-US bilateral tensions centered around Israel’s problematic role in the Middle East as opposed to the domestically -orchestrated anti-Americanism of former President Jacob Zuma. How President Cyril Ramaphosa navigates this terrain apart from Nigeria’s very pronouced pro-Trump posture reflected in Nigerian President Muhammadu Buhari’s recent White House visit remains to be seen. Indeed, the timing of Buhari’s visit and its high profile Rose Garden news conference coverage is a statement in how Washington is defining its Africa policy under Trump. For good measure, in the immediate run-up to the visit, Abuja and Lagos-based Premium Times carried a report titled “Boko Haram: Nigeria did not get required support from Obama – Presidency,” citing Buhari’s Senior Special Assistant on Media and Publicity, Garba Shehu.

Of course, Nigerians know very well, playing into Trump’s racist ego in bashing Obama will get them everywhere in today’s Washington. This is as Obama makes it down to South Africa in July to deliver the 16th Nelson Mandela Annual Lecture in Johannesburg. The question this poses: will Obama, a former anti-apartheid activist in his student days, have anything to say about the deteriorating state of US-South African relations under Trump? One shouldn’t hold one’s breath on this one as African-American leadership, even including the former White House occupant, is largely ‘missing in action’ these days.

This is all unfortunate for President Ramaphosa as his DNA dictates he would definitely like improving US-South African relations. These were not helped by the less than friendly vibes emanating from his predecessor. Quite an irony this, because Zuma conveyed a cold war anti-imperialist divide between a South Africa-aligned BRICS and the US and the West as if BRICS were the alliance it is not. Now Ramaphosa, having launched his economic diplomacy offensive hits the wall of Pax-Americana’s Trumpian impulsiveness.

Moreover, Obama arrives in Johannesburg in what amounts to ‘BRICS Month’ when the BRICS Summit takes place in South Africa. Thus, do prospects of a Trump-inspired cold war against Ramaphosa’s economic diplomacy amid a prospective US-Nigeria axis portend possibly reinforcing fissures between South Africa and Nigeria at a time when Tshwane needs to flesh out Zuma’s ‘regional outreach’ in articulating a compelling BRICS-Africa strategy on the continent? The possible pathway out of these dilemmas may suggest itself in the forging of a pan-African Kigali Declaration alliance that Ramaphosa recently signed South Africa up to which should lead to ratifying the African Continental Free Trade Area (CFTA). This would be in tandem with generating momentum in the eastern and southern African ‘Cape to Cairo’ Tripartite FTA between the Common Market of Eastern and Southern Africa (COMESA), the Southern African Development Community (SADC) and the East African Community (EAC).

This implicates the need for building up a comprehensive Afroasiatic Indian Ocean Rim strategy beyond the functionalism of the Indian Ocean Rim Association (IORA) in forging geoeconomic links with Southeast Asia’s ASEAN Economic Community. But this takes South Africa right back into the thickets of the Middle East as the geopolitics of the fractured Gulf Cooperation Council destabilizes the Northeast African-Red Sea subregion of the Cape-to-Cairo mega-FTA while Ethiopia and Egypt remain at loggerheads over the impact of Addis’ Ethiopian Grand Renaissance Dam (GERD) on Nile River Basin waters.  Can South Africa insert itself into calming these waters sufficiently to benefit interregional trade integration along the eastern-southern African littoral? Could this not form part of its BRICS agenda as it sticks to its guns on Israel-Palestine while waiting out the follies of US foreign policy a la Trump. Perhaps, if and when Nigeria ends its aloofness to the KigalI Declaration, South Africa and Nigeria might overcome the implicit divide-and-conquor overtones of Trumpian Cascades. As someone we know likes to say: “We shall see what happens”!

Francis A. Kornegay, Jr. is the senior research fellow at the Institute for Global Dialogue associated with UNISA and Global Fellow of The Wilson Centre in Washington.

The views expressed are those of the author and do not represent IGD/Unisa policy.