The beginning of 2018 came with what is possibly South Africa’s busiest diplomatic calendar year since 1994 as the country finds itself at the helm of various international and regional groupings that have strategic importance.  It thus chairs the Brazil, Russia, India, China, South Africa (BRICS) group, the Indian Ocean Rim Association (IORA) and the […] 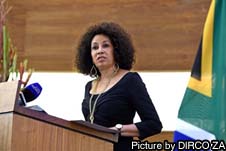 The beginning of 2018 came with what is possibly South Africa’s busiest diplomatic calendar year since 1994 as the country finds itself at the helm of various international and regional groupings that have strategic importance.  It thus chairs the Brazil, Russia, India, China, South Africa (BRICS) group, the Indian Ocean Rim Association (IORA) and the Southern African Development Community (SADC), while set to relinquish its rotational co-chairing of the Forum for China-Africa Cooperation (FOCAC) and participate in the Group of 20 (G20) meeting as the only African representative.   South Africa assumes these leadership roles at a time when domestic politics are recovering from a leadership transition in the governing party, leading to the question of whether South Africa will be able to advance its national interest within both the African and global contexts.

While trying to pursue its national interest of being people centred, including promoting the well-being, development and upliftment of its people, protecting the planet for future generations and ensuring the prosperity of the country; its region and continent as whole, South Africa’s post 1994 foreign policy has faced a number of challenges.  It has at times been characterised by inconsistencies and controversy, although there has been some continuity between the Thabo Mbeki and Jacob Zuma administrations regarding their African agenda and international cooperation. Under Nelson Mandela, the focus was on championing human rights and re-joining the international community after South Africa had been isolated during the apartheid years. However, despite the more elevated human rights discourse during the Mandela years, he was also not immune to close scrutiny by various state and non-state actors about his choice of friends, which included close relations with Libya’s Muammar Gaddafi, Palestine’s Yasser Arafat, Cuba’s Fidel Castro and Indonesia’s Suharto.  When questioned about their human rights records, Mandela would often say that he was free to choose his friends.

South Africa’s contradictory actions in relation to championing human rights have continued since the Mandela administration as the democratic government was confronted with the realities of global politics, where the pursuit of the national interest is not always aligned with one’s own internal values as a nation state.  In September 2014, the Dalai Lama’s application for a visa was denied, largely seen as South Africa putting its economic interests above human rights. Moreover, South Africa turned a blind eye to the widespread human rights violations in Zimbabwe leading up to the 2002 elections. A SADC Parliamentary Forum Observer Mission report on the Zimbabwe elections was suppressed by the Mbeki administration; the report had declared the elections unfair and unfree. From Mandela to contemporary times, all the administrations have been grappling with the complexity of advancing national interest and championing a human rights agenda that emanates from South Africa’s own internal struggle.

The Thabo Mbeki administration chose to elevate the African agenda, strengthening ties with other African countries and pushing for more recognition and benefits for Africa while promoting a more equitable global order. The Jacob Zuma administration was a continuation of this focus on South-South cooperation with South Africa’s membership of the BRICS grouping being a major accomplishment in advancement of the Global South agenda.

Furthermore, South Africa’s position on the reform of the UN including its interest in a permanent seat in the United Nations Security Council (UNSC) and its participation in the G20 has added to the projected image of South Africa being the corporate and institutional gateway to the continent.  However, South Africa’s efforts in becoming a prominent power in the global South, such as its BRICS membership, its G20 participation and its UNSC ambitions, have also added to the negative perceptions of African countries about South Africa’s hegemony. African states have been sceptical of South Africa’s declarations that it will use its international representation to advocate for the issues plaguing the continent, as they do not necessarily share the view of South Africa as a continental leader.  Contradictions to the African agenda as a core tenet of South Africa’s foreign policy, including the outbreak of xenophobic attacks and its quiet diplomacy approach to the crisis in Zimbabwe, have also cast a shadow on its Afrocentric foreign policy orientation.

South Africa has stated that its Chair ship of IORA will be used to promote and attain its priorities including the African Union’s 2050 African Integrated Maritime Strategy (AIMS) and Agenda 2063.  National interests will also benefit from the IORA Chair ship as the Association’s seven priority areas align perfectly with South Africa’s own objectives under Operation Phakisa, which aims for the development of an ocean economy.

A key question remains whether South Africa has the capacity, both in financial and human resources, to meet all the stated foreign policy objectives or has South Africa bitten off more than it can chew, especially considering the many domestic challenges that need to be addressed before attempting to address external ones? This then highlights the importance of the consultations on the Foreign Service bill, which is meant to build a professional and competent foreign service that will be able to represent South Africa in the desired manner, pursue national interest as well as translate South Africa’s diplomatic presence into tangible results for both the country and its sub-region.

Although the election of the new president has ushered in what is being called a new dawn, it remains to be seen how President Ramaphosa will utilise these various multilateral leadership roles in addressing domestic challenges. In his State of the Nation Address, the President clearly articulated the importance of improving economic growth by increasing business confidence, wooing investors and expanding trade, which will translate into job creation and poverty reduction and making it clear that these objectives require a professional and dedicated foreign service that will promote and represent Brand South Africa internationally. The President also spoke on the need for an economically independent African Union that has competent institutions that will be able to try gross human rights violations and war crimes. This is important given the recent shielding of leaders accused of violations such as Burundi’s President Pierre Nkurunziza, Sudanese President Omar al-Bashir and DRC President Joseph Kabila.  If obtained, these objectives will see South Africa being able to use its 2018 foreign policy agenda to advance the national interest within both the African and global contexts.

Ms Remofiloe Lobakeng holds a BA Hons in International Politics from UNISA and is a research assistant at the Institute for Global Dialogue associated with UNISA. Her views do not necessarily reflect those of the IGD