Whither Negotiations on Finance for Development, the Post 2015 Development Agenda and Climate Change?

Whither Negotiations on Finance for Development, the Post 2015 Development Agenda and Climate Change?

The year 2015 has been dubbed by some as a watershed year in international diplomacy and intergovernmental negotiations. It thus sees the Millennium Development Goals (MDGs) coming to an end after an unprecedented era in terms of international development. Indeed never before has the world collectively rallied around a set of development priorities as articulated in the Millennium Declaration, which was used to mobilise resources in both developed and developing countries around what has increasingly been seen as the right to development. 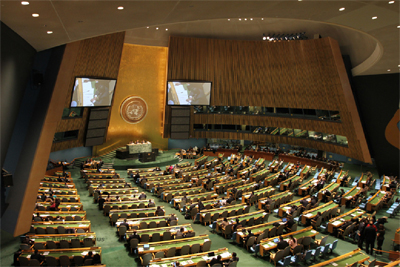 Despite these achievements, many developing countries continue to feel let down by various global governance processes and structures negatively impacting on the lives of millions of people across the globe. Part of the rationale for various negotiation tracks taking place is to rewrite global governance rules which have partly led to growing social and economic disparities around the world. These negotiation processes are often long and complex, requiring one to simultaneously focus on a multiplicity of issue areas and agendas to understand what is taking place.

Contemporary global politics continues to be characterised by a growing amount of complexity, which manifests itself through various ongoing bilateral and multilateral intergovernmental negotiations. In terms of development outcomes, three tracks of high level multilateral negotiations have kept international negotiators awake at night.

These include the recently concluded third financing for development meeting which took place in Addis Ababa to reach agreement on financing mechanisms essential to meeting development priorities, the post 2015 negotiations on sustainable development goals in New York aimed at reaching agreement on the set of development priorities for the next 15 years and their operationalisation, and lastly the upcoming climate change negotiations to be held in Paris under the auspices of the United Nations Framework Convention on Climate Change (UNFCCC), which could reach a binding agreement on climate change and emissions levels, and affect socio-economic models to growth and development across the world.

As these negotiation tracks continue to unfold, it must be noted that a gulf continues to persist between analysts and practitioners in the field of public diplomacy resulting in little cross-pollination. As a result, opportunities for mutually reinforcing efforts are often missed. The birth of the South African Council on International Relations (SACOIR) was thus an important initiative, and falls within efforts for better engagement between state and non state actors in shaping international relations. It is thus hoped that it will increasingly open up opportunities for briefings between practitioners and non-practitioners to generate insights into the workings of international diplomacy.

It was in this spirit that on the 18th August 2015, the Institute for Global Dialogue (IGD) associated with UNISA in collaboration with the Global and Continental Governance Branch of the Department of International Relations and Cooperation (DIRCO) had the pleasure of putting together a closed roundtable with Ambassador Mxakato-Diseko on key United Nations development related processes unfolding.

Held at the DIRCO headquarters in Pretoria under Chatham House rules, the roundtable brought keen observers in the form of analysts, researchers, activists and other interested parties in contact with Ambassador Mxakatho-Diseko and her negotiation team with the purpose of unpacking the dynamics that underpin various multilateral negotiations impacting on global development efforts. Now that the long, multi-faceted and complex intergovernmental negotiations at the United Nations on the post 2015 development agenda have concluded and the agreed agenda will be tabled before heads of state at the UN General Assembly in September 2015 for final adoption, it was indeed a timely moment for this insightful dialogue.

It became apparent from the discussions that ensued how imperative it was for civil society organisations, individual researchers and activists to understand the underlying complexities and multiple interests at play, which would partly be accomplished through a process of consistent engagement between the myriad stakeholders. While the state leads all multilateral intergovernmental negotiations, it became clear that an informed civil society focused not only on domestic developments, but on the intricate and often behind the doors processes taking place at a global level in various cities across the world was essential in a constantly evolving and interconnected global order.

Building on the success of the roundtable, the challenge is for stakeholders such as DIRCO and the IGD to continue to create spaces for dialogue on global matters with diverse societal actors with the aim of creating a better Africa and a better world. Such briefings have an impact and reveal the internal dynamics and complexities of intergovernmental negotiations. This is all the more the reason for non state institutions to develop the practice of holding joint briefings with practitioners and doing a better job of walking the sidelines of multilateral diplomacy. These steps will help in nurturing a knowledgeable civil society able to critically engage in an informed manner with practitioners.

Despite taking place in different capitals, and sometimes with different negotiating teams, it is clear that the abovementioned three tracks of negotiations are connected and have the possibility of making a significant difference to the challenge of development today. It is thus imperative to continue to closely observe the upcoming negotiations taking place in Bonn and then in Paris, which will seek to take forward the outcomes reached in Durban on climate change.