In mid-June, Russia, in it’s role as President of the Group of Twenty Countries (G20), hosted the first Civil Summit (C20) in Moscow in the run up to the G20 Summit that will take place in September this year. The C20 is a gathering of civil society organisations that were brought together, ostensibly, to inform the upcoming G20 discussions.

The C20 joins the ranks of the business lobby: B20 and labour: L20. There is also a group of think tanks called the T20 and recently the youth lobby organized as Y20. Australia has also proudly announced the hosting of a C20 when it takes over the presidency of the G20 next year. 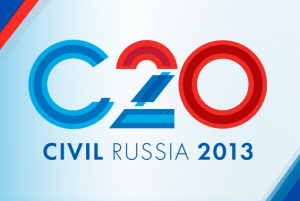 The G20 is one of a new generation of global groupings that have overlapping memberships and varying self-interests. As a result, country positions vary depending on the agenda of their group. South Africa is not only a member of the BRICS grouping (Brazil, Russia, India, China and South Africa) and the G20, but is also the only African country represented at these forums.

The BRICS is significant in terms of its geo-strategic purpose, potentially constituting a prime countervailing source of power against the established hegemonic powers of the G8 (Group of Eight countries) consisting of the world’s largest developed economies. The G20 is largely seen as an extension of the G8. It was established to address the global financial crisis and includes the world’s largest emerging economies.

The meetings of these self-appointed global groupings are important because foreign relations are fostered when they take place. At the same time, critical global economic matters are discussed.

Over the years, international economic policy choices have played an important role shaping national economic policies. This is particularly evident in trade, finance and investment policies. The G8 is seen as the incubator of market-centred policies, and has become the target of protests by anti or alternative globalisation movements. The G20’s agenda is broader than global financial matters, but it too supports austerity measures as a solution for countries dealing with debt crises.

It is evident that the lives of ordinary people are both directly and indirectly affected by decisions taken at these meetings.

This makes it critical for South African civil society organisations and the public at large to be concerned with matters being discussed at these global forums. But how is it possible to influence discussions at these events when international relations are so far out of the general public’s reach?

South Africans should be concerned about whether our government is adequately representing our vision at these forums. In whose interest does the South African government participate in global forums? How are positions formulated? Are current platforms adequate to include a wide spectrum of voices, particularly, those most negatively affected by proposals and decisions?

When it comes to South Africa’s foreign policy and international relations, these discussions seem to be the domain of an elite group of think tanks, experts, international NGOs and representatives from business forums.

I participated in this C20 Summit as a representative of one of four organisations from South Africa, the Economic Justice Network that was invited as a partner of Oxfam. Others present were the Institute of Global Dialogue (IGD), South African Institute of International Affairs (SAIIA), and the South African National AIDS Council (SANAC). We were all surprised to meet each other in Moscow. This made me think about the lack of coordination at national level and limited spaces to engage on international matters both within civil society and government.

The C20 also revealed the challenge of bringing diverse groups together with their own agendas and varying policy views, which makes it impossible to put forward a cohesive and common agenda. It reminded me that civil society is not a homogenous voice and positions advocated are not always benign. More inclusive organisation is indeed required with a clear political vision of what the civil society collective wants to achieve.

“Inequality undermines growth,” was a central message that emerged at this first C20 Summit. It was strongly advocated by Oxfam. However, very little discussion took place about how the current economic growth paradigm is a primary cause of inequality. There were no ideas presented for alternative development paradigms.

Igor Bashmakov, a Nobel Prize Laureate and Executive Director of the Centre for Energy Efficiency, was the only person, who, in his speech raised concerns about the current economic paradigm. He emphasized, “The economy designed to produce more miles per hour than smiled per hour” and the fact that “the future is about shrinking the economy”.

Business or the B20, on the other hand, came with very different recommendations. One of which is the removal of restrictions to improve the free flow of capital by instituting a multilateral investment framework. This proposal should set alarm bells ringing. Transnational corporations already operate with impunity in the current global financial system and are able to shift large sums of profit to low tax jurisdictions (tax havens). They also enjoy a legal investment framework that provides investors with a number of rights to protect their investments, often at the expense of public interests.

Organising the C20 was a huge victory for the Russian Presidency, for Russian civil society and international NGOs, such as Oxfam, World Vision and Save the Children. However, if these forums are to be effective and give meaning to the principles of democratic participation, then broader civil society must be given support to engage more effectively. National level civil society organisations in particular must demand formal platforms for engagement on foreign policy and global matters, which government needs to support financially, as part of its support for a democratic society.