On Friday, 02 February 2012, the Institute for Global Dialogue (IGD), along with the Department of International Relations and Cooperation (DIRCO), hosted a roundtable on South Africa’s second tenure in the United Nations Security Council (UNSC). 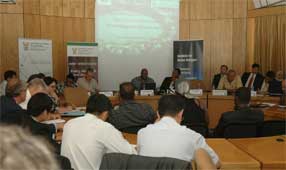 The roundtable, which was chaired by Mr Francis Kornegay of the IGD, was a sequel to a similar meeting convened in August 2011 as part of a project funded by the Open Society Foundation for South Africa (OSF-SA). The project seeks to understand and stimulate dialogue around South Africa’s dilemma in balancing multiple relationships and agendas during its second term in the UNSC. Panelists included Mr Aubrey Matshiqi from the Helen Suzman, Prof. Anthoni Van Nieuwkerk of the University of the Witwatersrand and Ms Ncumisa Notutela from DIRCO. The February 2012 roundtable, which was attended by government officials, members of the diplomatic corps and civil society, aimed to discuss South Africa’s unfolding membership of the UNSC, with specific reference to how this is being used to promote the African Agenda.

Both the presentations and discussion at the roundtable revealed the complexities and controversies that have come to define South Africa’s membership of the UNSC in general and the promotion of the African Agenda in particular. There seemed to be little divergence among participants on the values, principles and interests that should drive South Africa’s foreign policy decisions within and outside the UNSC. There was also near consensus on the observation that national interest-driven dynamics in both the chambers of the UNSC and the corridors of the African Union (AU) continue to undermine South Africa’s efforts to promote the African Agenda. However, there was plenty of debate over, among other things, the soundness of Pretoria’s diplomacy in Africa, South Africa’s capacity to assume a leadership role on the continent, and the nature of the foreign policy discourse in South Africa. In essence, the roundtable underscored the evolving nature of South Africa’s foreign policy and the need for constant and nuanced dialogue on its future, not only among South Africans but also between South Africa and other stakeholders in Africa and the world at large. A full proceedings report of the roundtable will be made available on the IGD’s website in due course.