Youth instrumentalization, ethnic tensions and militarised politics could undermine peaceful elections in eastern DRC, according to delegates at the IGD-facilitated inter-provincial dialogue in Kisangani.

Youth instrumentalization, ethnic tensions and militarised politics could undermine peaceful elections in eastern DRC, according to delegates at the IGD-facilitated inter-provincial dialogue in Kisangani.

The dialogue in Kisangani was held on 13 October 2011 and was the last in a series of inter-provincial forums convened by the IGD to assist in engendering an atmosphere conducive to peaceful, transparent and credible elections in the DRC. 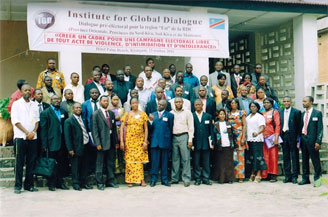 Previous encounters took place in June and August 2011 in Kinshasa and Kananga. The provincial forums were preceded by a March 2011 dialogue in Pretoria, South Africa, which brought together the national leadership of major political parties and civil society groups from the DRC, as well as the Congolese diaspora in South Africa.

Convened under the theme: creating a framework for elections campaign free from violence, intimidation and intolerance, the Kisangani dialogue assembled representatives of political parties, civil society organizations, as well as the DRC’s electoral commission (CENI) from the eastern provinces of Oriental, Nord Kivu, Sud Kivu and Maniema. The dialogue was officially opened by the Vice-Governor of the Oriental Province, His Excellency Ismael Arama, who urged his compatriots to act responsibly during the period of election campaign with a view to preserving the gains of peace and democracy in the DRC.

Among the key outcomes of the Kisangani dialogue is the identification and condemnation of the tendency for politicians in the eastern provinces to recruit the youth as instruments of violence and intimidation. This practice, which was recognised by all participants as a major threat to peaceful elections, is believed to be supported largely by the high incidence of youth unemployment and illiteracy in these provinces, with this young constituency embracing the electioneering period as an opportunity to extract perceived ill-gotten wealth from politicians.

The Kisangani dialogue also underscored the challenge to peaceful, inclusive and democratic elections that emanates from lingering insecurity in the east of the DRC, most notably in the two Kivu provinces. For example, delegates from Nord Kivu noted that some parts of the province are effectively under the control of armed groups, making it difficult to conceive of open, competitive and peaceful polls in these areas. This situation is made worse by the incomplete disarmament and demilitarisation of erstwhile chief combatants, most of whom now run political processes in the Kivu provinces. Similarly, it was observed that current ethnic relations in the Kivu provinces were not conducive to healthy political competition and that the upcoming elections are likely to become a vehicle for reconfiguring ethno-political fortunes, with potential devastating consequences.

In the light of these and other observations, the final declaration of the Kisangani dialogue, among other things, urged politicians to refrain from exploiting the vulnerability of the youth and instead join forces with civil society organisations to fast-track the civic and political education of the youth. A call was also made for the government of the DRC to take urgent measures to secure the country’s borders throughout the electoral period in order to ward off any opportunistic tendencies. Delegates at the Kisangani dialogue also made a special appeal for the IGD to convene, prior to the scheduled polls, a dialogue among the major ethno-political groups in Nord and Sud Kivu as a means to avert the escalation of ethnic tensions during elections.

A full report of the proceedings and recommendations of the Kisangani dialogue will be posted on the IGD’s website in due course. The DRC dialogue series is made possible by generous financial support from the Open Society Initiative of Southern Africa (OSISA).